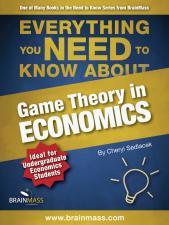 This book describes the development, uses, and implications of game theory in economics. Game theory is the systematic exploration of interactive, strategic decision-making. As such, it has applications in many fields, including biology, psychology, and economics. Here, we will examine how game theory can be applied to various problems in economics.

While game theory can be approached in a vigorous, mathematical way, we will use matrices, which is the commonly done in economics. We will develop a set of tools that will enable us to solve the most common games, and the implications of these solutions. Ideally the reader should have a basic understanding of economics, but terms will be defined in case they are unfamiliar.

The reader will gain an understanding of how different economic situations can be modeled using game theory, and how game theory shapes economics today. The principles of the Nash equilibrium will be explored in some detail, allowing for the reader to thoroughly grasp the underlying concepts, which can be counterintuitive. We will see how game theory enables economists a rigorous tool to explore problems their field. As such, game theory is in economics essence a branch of mathematical economics. It remains a subject of intense research, with significant ramifications in the business world today.

So it is that often without being recognized, game theory guides our decisions. Every day, people face choices and live with the outcomes of their choices. Whenever we interact with another person whose choices affect these outcomes, we enter the realm of game theory. It is woven into our daily lives, and so it profits us to study it.

Game theory goes by many different names, such as the theory of social situations and multi-person decision theory. It defies any single definition because its scope is so broad. It is closely related to the discipline of decision theory, a mathematical process that provides procedures for making choices between different alternatives under uncertainty. However, game theory examines only certain types of decisions: those that involve interactions with other entities. These entities are called players, and their winnings are the payoffs.

Consider for example a duopoly, involving two equally powerful firms. Their decisions regarding output, pricing, and advertising directly affect each other. While they may be competitors, they may also be able to maximize their profits, collectively, by cooperating. Game theory becomes most useful in these cases, because our world is nuanced and complex. Our interactions with each other always involve elements of not only conflict, but also of cooperation and compromise. Because of its practical usefulness, game theory remains a subject of intense research. As new developments emerge, they often challenge cherished beliefs about how games should be solved. Such tumult is the mark of a field of study that still has much new and exciting territory to be explored.