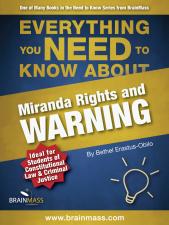 This book is written for the attention of students of constitutional law and criminal justice. It may also appeal to those who may have an interest in the rights of suspects in police custody when subjected to police interrogations.

The objective is to provide basic information of the Miranda Warning. It does so by discussing the underpinnings of the doctrine as it relates to our constitution and its impact on law enforcement. It concludes by exploring the debate surrounding Miranda case law, its relationship with the US Criminal Justice System and the disposition of criminal cases.

Anyone familiar with certain TV shows about crime and police interrogation or who has been arrested by the police in the US would be aware of the warning known popularly as the Miranda warning. Miranda warning has become an inherent part of the police questioning procedure since the US Supreme Court introduced it in 1966. In its most basic format, its objective is to ensure that any improperly obtained evidence from a suspect cannot be used in a subsequent criminal trial against that suspect and to warn the suspect against giving up his constitutional rights
What it Means?
This means that upon arrest and holding in police custody, the police must advise the suspect certain of his constitutional rights (and warn him of the dangers of giving them up) before they can begin to question him. If they fail to do so, any evidence they obtain during the interrogation cannot be used at trial against that suspect.

The Miranda warning, as used in law enforcement and criminal law, refers to a very important concept of respect for civil liberties and the adducing of evidence when suspects are held in custody and being dealt with by the police. Its requirements are so well known that the Supreme Court remarked Miranda has become embedded in routine police practice to the point where the warnings have become part of our national culture .

The doctrine of Miranda was established by the US Supreme Court case of Miranda v. Arizona. The ruling identified certain constitutional rights, which every citizen has upon being subjected to police questioning when in custody. These rights ensure that a criminal suspect in police custody must be informed of his basic constitutional rights before being interrogated.
The court reasoned, in it s ruling, the inherently coercive setting of custodial questioning required greater protection for the defendant than the voluntariness standard provided .