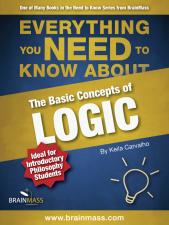 This eBook offers an explanation of the basic concept of Logic and Critical thinking. The book will discuss Deductive arguments, clearly explain deductive argument forms, identify arguments and fallacies, introduce the fundamental ideas of Aristotelian logic and offer a brief overview of inductive reasoning.

This book is ideal for students taking an introductory philosophy course in basic logic.

Logic is the branch of philosophy concerned with the study of rational arguments: the method used to analyze and determine if the argument given is good or bad . An argument is an assertion made, with evidence given in support of that assertion. It is necessary to know how to analyze arguments to determine whether they are good or bad, as often it is the case that there are many assertions given with opposite conclusions. It is important to know how to differentiate between the conclusions and decide which are most reasonable to accept as the best.

In order to understand the key concepts of Philosophy in general, one must understand the key concepts of logical thought in particular. This eBook covers the basic ideas and concepts found in any introductory philosophy course. In most universities, a course in Logic is required for a major in Philosophy. This eBook will offer a complete overview of basic concepts in logic that one will find in any college 100 level logic course.

This eBook is broken into six sections so that the concepts under the umbrella of logic are easier to understand and differentiate. First, is a discussion of the fundamental concepts in logic, such as, deduction versus induction, validity and soundness versus strength and cogency. The second section is a discussion of deductive arguments and their forms. The third section looks at the different fallacies that occur within deductive reasoning. The fourth section is an in depth discussion of traditional Aristotelian logic, offering an explanation of the square of opposition and categorical statement. The fifth section looks at Venn diagrams and offers a brief explanation of diagramming syllogisms. The Final section is a discussion of several types of inductive logic.