Schizophrenia, which has a lifetime morbid risk of 7.2 per 1,000 people¹ and often begins in late adolescence to mid-adulthood, is a very serious brain disease often leading to inability to function in society, which results in high costs and economic pressure. However, with appropriate diagnosis and treatment, individuals with schizophrenia can have a great chance of regaining their ability to have a normal or close to normal life.

Theories as to the cause of schizophrenia focus on both biological and environmental factors. For instance, studies have shown genetic heritability of the disorder, due to the fact that it occurs in about 1% of the population but 10% in individuals with a first-degree relative with the disorder². Neurotransmitters like dopamine and glutamate are also implicated in the disease, and the brains of some people with schizophrenia have larger ventricles, less gray matter, and enhanced or reduced activity in various areas of the brain². Environmental influences implicated in the cause of schizophrenia include hypoxia (lack of oxygen to part of the body), infection, stress, and malnutrition in a pregnant mother, which could then affect the fetus. After birth, the influence of drugs like cocaine and alcohol can create psychotic-like symptoms and result in schizophrenia in some cases, and those who face adversity, isolation, or a hostile family environment are at a higher risk of developing the disorder. 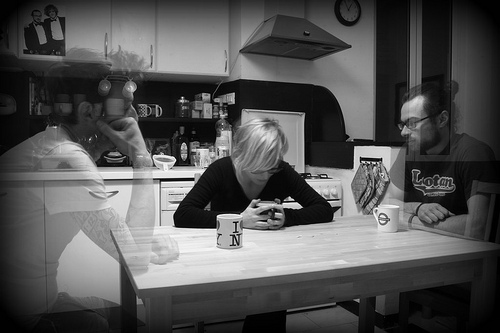 Symptoms of schizophrenia can be classified as either positive or negative, with positive symptoms meaning the presence of behavior not normally seen in the general population and negative symptoms meaning a more toned down, muted individual. Some positive symptoms include hallucinations (which can be visual, auditory, tactile, olfactory and gustatory), delusions, and disorganized speeh, cognition and movement. For example, the person may hear voices telling them that people are spying on them (auditory hallucination), they may feel like they are God (delusion of grandeur), and they may wear very heavy clothes in the middle of summer (disorganized cognition). Negative symptoms involve such things as lack of emotion and responsiveness (flat affect), alogia (lack of speech), anhedonia (lack of pleasure), asociality (uncaring about relationships), avolition (lack of motivation), poor memory, and inability to concentrate. These negative symptoms are often harder to treat than positive symptoms.

Schizophrenia is often treated through the use of antipsychotic medications and atypical antipsychotics, which are normally very effective in treating the positive symptoms of schizophrenia. Psychotherapies can also be used, like cognitive-behavioral therapy, family therapy, and group treatment, in order to help the individual understand the disease and how to manage it and cope in life.

Please provide an analysis on treating patients with schizophrenia and other psychoses. In this explain 1st and 2nd generation antipsychotics and the differences between them. Finally, evaluate the side effects of antipsychotics and how they can be managed or mitigated. Please use scholarly sources as well as see the attached fo

Positive Symptoms of a Diagnosis for Schizophrenia

I have a client who is schizophrenic, who when he has his episodes talk about everything and says anything. He says he is God and made the world. Sometimes he says things like he created Michael Jordan and Nike shoes, he makes all cars and owns every thing. At times he gets angry and uses violent, abusive, and inappropriate lan

Influences on Treatment of Schizophrenia

What has influenced the way the mentally ill are treated today when it comes to schizophrenia?

I need help writing a short research paper on schizophrenia (3-4). Can you please help me? Thank you.

Compare one type of schizophrenia with another psychotic disorder.

What is an alternative therapeutic treatment for Schzophrenia outside of cognitive and pharmocological treatment? Compare measures of effectiveness such as validity, efficacy, behavior management and recidivism in regards to Schizophrenia.

I need help creating a literature review on workplace diversity and schizophrenia for my PhD assignment.

I need information on schizophrenia, the causes of it, the symptoms of it, and the treatments of it.

Schizophrenia is a complex brain disorder. It can affect the ability to think clearly, manage feelings, make decisions, and relate to other people. Discuss two of the causative factors of schizophrenia. Examine the success of one treatment approach for this disorder.

Environmental Factors that Contribute to the Onset of Schizophrenia

Schizophrenia is a common disorder that is often diagnosed based on certain symptoms such as delusions, hallucinations, and cognitive deficits, although care must be taken to ensure that this disorder is not confused with different conditions that can cause some of the same symptoms (e.g., bipolar disorder). Several studies have

Based on a diagnosis of Schizophrenia, do you think it is possible for some people to abruptly experience an active psychotic phase with little to no warning, or do you think that these symptoms are virtually always preceded by long-standing warning signs? Why? If you think psychotic symptoms can emerge abruptly, under which con

Read the box at the end of chapter 13 "Unresolved Issues: Can Schizophrenia be Prevented?" After reading the text and looking at the evidence for biological, psychological and social risk factors and remembering the diathesis-stress model of pathology, how could you make a case that schizophrenia (which has a worldwide prevalenc

Compare and contrast two of the subtypes of schizophrenia, which are (Paranoid Schizophrenia) and (Catatonic Schizophrenia). Identify the symptoms as either positive or negative. What are some factors that increase the risk for development?

Define schizophrenia, its signs and symptoms, its causes and prevalence and how to prevent it and treat it.

1. How do you present a treatment plan for an individual who has schizophrenia using family focused therapy and CBT? The individual has delusions and auditory hallucinations and a family history of mental illness. Are there any limitations? 2. What tests or assessment procedures would you use for an individual with schizoph

Hallucination, delusion and psychosis and schizophrenia

1) What is the difference between a hallucination and a delusion? 2) What is the impact of psychosis and schizophrenia on families? nurse response, about 300 words, one reference

Why is it possible for only one twin to have schizophrenia? What impact does this have on the prevention and treatment of schizophrenia?

Can you cure Schizophrenia?

How would you define Schizophrenia? Is it possible to cure, manage or effectively treat this disorder? If so, how? If not, why not?

What is the impact of psychosis and schizophrenia on families? What resources are available to the families and give two (2) examples of such resources?

Concerning schizophrenia, describe how altered states of consciousness related to sleep, psychoactive drugs, meditation and hypnosis affect individuals with the disorder. -References required -No minimum or max word requirement, but must be complete -with outline Thank you,

Define the major DSM IV-TR categories of schizophrenia and psychosis, and lifespan development. (the definition, and the diagnostic features) in simple terms.

Schizophrenia and its Treatments Options

We have discuss the role of medication in treatment of this disorder. Once the disorder presents itself, what benefit is there, if any, of psychotherapy? Or of psychoeducational services? What additional services help those with schizophrenia?

Reducing the Risk of Getting Schizophrenia

Do you think it is possible to prevent schizophrenia? If so, how? If not, why not?

Comparison between Schizophrenia and Delusional Disorder

Analysis of the issue and its affect on biological psychology of Schizophrenia.

What are the types of Schizophrenia, the types most likely in developing countries and differences in recovery?

Describe schizophrenia Explain the neurological damage/changes to the brain as a result of your selected illness.