Bipolar Disorders are mood disorders that have periods of mania or hypomania, and periods of depression. There are three different types of bipolar disorder.

of Bipolar I disorder. Those who suffer from Bipolar I often talk rapidly, sleep less than normal, are impulsive and take on many tasks.

To be diagnosed with bipolar I disorder, an individual must have one or more manic episodes OR mixed episodes. A major depressive episode may have occurred in the past or present but is not required for diagnosis.

Bipolar II Disorder is characterized by hypomanic and depressive episodes.

To be diagnosed with bipolar II disorder, an individual must have experienced one or more major depressive episodes with at least one hypomanic episodes.

Cyclothymia includes long term (at least 2 years) cyclings of moods between depression and hypomania. Hypomania is not severe enough to be considered a manic episode.

There are three types of mood disorder episodes that can be found in a bipolar episode:

1. Major Depressive Episode - five or more of the following must be present during the same 2-week period and represent change from previous functioning: 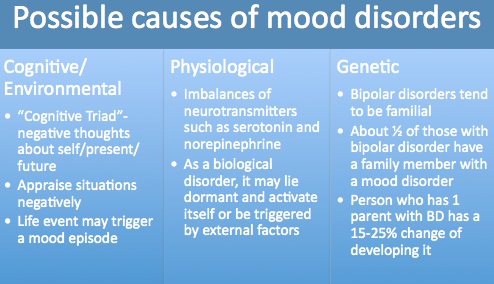 2. Manic Episode - abnormally and persistantly elevated, expansive or irritable mood lasting at least 1 week (or shorter if hospitalitized). At least three of the following symptoms must be present:

4. Hypomanic Episode - criteria met for manic episode for 4 days, but symptoms not severe enough to cause impairment or hospitalization.

How is BPD treated?

The most effective anti-manic drug for treatment of bipolar disorder is lithium carbonate - a naturally occurring molecule. This has relatively severe side effects and is extremely toxic in overdose. Unfortunately, the amount needed to attain a response is close to toxic levels.

Drugs originally developed to treat epilepsy have also shown efficacy in treating bipolar disorders. They are mood stabilizers and work on the GABA neurotransmitter and are generally used to treat bipolar disorder by inhibiting neural activity.

Client compliance is a often a problem for those who are bipolar. Many enjoy the the initial phases of a manic episode and cease taking their medication. Using psychotherapy with medication has been shown to increase compliance.

The benefits of utilizing a balance sheet in psychotherapy

Depression and Anxiety in U.S. Society

•Why do you think that depression and anxiety are considered the "common cold" of mental health? •What is it about U.S. society that causes so many people to be depressed or anxious? •What factors are related to the workplace?

Determine the national and international incidence of a chosen illness.

Visit the site, "Lost Among Us" at http://lang.sbsun.com/projects/lostamongus/displayarticle.asp?part=6&article=art02_saida03 and get to know the sad case of Saida Dugally, a real-life woman who suffered from bipolar disorder until her tragic death in 2003. On this web resource you will find videos of her story and the timelin

What are the behaviors and symptoms of bipolar II disorder according to DSM-IV-TR criteria?

What are the behaviors and symptoms of bipolar II disorder according to DSM-IV-TR criteria?

Describe bi-polar disorder in two ways: clinically (objectively) and emotionally (subjectively). Compare and contrast biologically and psychologically based treatment for each. Does the approach make a difference when the depression is viewed objectively vs. subjectively? Why or why not?

An integrative summary of Bipolar Disorder is implemented from a Social, Personality, Developmental and Humanistic Perspective.

This paper provides an analysis of bipolar disorder: it's neurological basis; it's signs, symptoms, and functional deficits associated with it; and it's prognosis, causes and therapeutic interventions.

Bipolar I Disorder and Schizo-Affective Disorder

Please help answer the following question. Is there really a difference between Bipolar I Disorder and Schizo-Affective Disorder?

What are the differences between Cyclothymic Disorder and Bipolar II Disorder? References are given.

I would like to know do people with bipolar disorders ever recover? I have heard of some people that have this disorder may go on a manic shopping spree buying everything in the store, then when that mood switches they start to become really depressed. Are bipolar people able to function fairly well in society? If so is it becau

Give an outline of Bipolar Disorder

Give an Outline of Bipolar Disorder

Http://www.medpagetoday.com/Psychiatry/Schizophrenia/12480 Can you comment/critique on the above copied article backing up your writing with references from your text readings & any other research you may do on the subject. Please add citations/references for whatever idea that is not your own. Please research your comme

A description of one psychological disorder and an explanation of the disorder from two or more casual viewpoints.

Explain the behavioral/functional changes that can occur as a result of bi-polar disorder. Describe the suspected or known causes for bi-polar.