A voltage can represent either a source of energy, lost, used or stored energy. A voltmeter is used to measure the voltage between two points in a system. Voltage can be caused by static electric fields by electric current through a magnetic field, by time-varying magnetic fields, or some combination of these.

Similar to mechanical potential energy, the zero of potential can be chosen at any point so the difference in voltage is the quantity which is meaningful. The difference in voltage measured when moving across point A to point B is equal to the work which would have to be done, per unit charge, against the electric field to move the charge from A to B. This voltage between the two ends of the path is the total energy required to move an electric charge along the path divided by the magnitude of the charge. This relationship can be mathematically modeled as the line integral of the electric field and the time rate of change of magnetic field along that path. 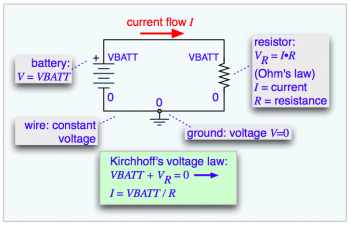 Kirchhoff's Voltage Law states that the total voltage around a closed loop system must be equal to zero.

EMF is the voltage generated by a battery.

Consider a parallel-plate capacitor having a separation of d=0.1mm and a capacitance of Co=11nF when having a vacuum between its plates. If the region between the plates is now completely filled with 19g of silicone oil, determine the maximum amount of charge that can be placed on the plates before dielectric breakdown occurs.

The overhead cable supplying an outbuilding from the 230V supply has a resistance of 0.9 ohms. A2kw radiator and a 1500w kettle both rated at 230v are in use at the same time. DETERMINE THE VOLTAGE AT THE TERMINALS OF THIS APPARATUS. What WOULD BE THE VOLTAGE IF A 750w; 240Vwater heater was also switched on?

3. In a certain installation the following items of equipment are operating at the same time.(i)a 3kw immersion heater (ii) two 100w lamps (iii) one 2kw radiator. All there are rated at 240V the nominal supply voltage at the origin of installation is 5Vless than this. Calculate (a) the total current.

** Please see the attached graph for further illustration ** Please help with the given questions: a. Using KCL write an equation for the currents I4, I5, I6 at the node point N. b. Express the KCL equation in step above in terms of VRIR and VnIR c. Write a KVL equation for the loop containing V4, VR5, and VR6 d.

A 11.2 microF capacitor is fully charged across a 12.0 V battery. The capacitor is then disconnected from the battery and connected across an initially uncharged capacitor, C. The resulting voltage across each capacitor is 2.08 V. What is the capacitance C? Please solve and explain problem.

Electrons have been transferred when difference in the plates

A capacitor has a capacitance of 2.32E-8 F. In the charging process, electrons are removed from one plate and placed on the other plate. When the potential difference between the plates is 460 V, how many electrons have been transferred? Please solve and explain problem.

A transformer with a turns ratio (secondary/primary) of 1:10 is used to step down the voltage from a 120 V wall socket to be used in a battery recharging unit. What is the voltage supplied to the recharger?

Energy in a Capacitor: Acetylene Gas

Acetylene gas is leaking from a cylinder in the immediate vicinity of an insulated conveyor belt which has built up a charge of 2.0µC. If the conveyor belt has a capacitance of 80pF, is there a danger of the acetylene being ignited? Consider both energy and voltage in your answer.

Electrostatics: Capacitance of a spherical capacitor.

A spherical capacitor is formed from two concentric, spherical conducting shells separated by vacuum. The inner sphere has radius 15.0 cm, and the capacitance is 116 pF. 1.) What is the radius of the outer sphere? 2.) If the potential difference between the two spheres is 220 V, what is the magnitude of charge on each sph

Electrostatics: Capacitance of a Cylindrical Capacitor

The batteries in a portable CD player are recharged by a unit that plugs into a wall socket. Inside the unit is a step-down transformer with a turns ratio of 1:13. The wall socket provides 120 Volts. What voltage does the secondary coil of the transformer provide?

A resistor as a resistance of 100kilohms and a power rating of one-quarter watt. What is the maximum voltage that can be applied across it?

A battery charger is connected to a dead battery and delivers a current of 6.0 A for 5 hours, keeping the voltage across the battery terminals at 12 V in the process. How much energy is delivered to the battery?

Use second Kirchoof's rule to explain why 60-W lightbulb produces more light than one rated 100 W when they are connected in series to a 120-V source.

Resistance in a Wheatstone bridge

Show that the output voltage, v_o, of the following circuit (see attached file) is proportional to the derivative of the input voltage v_i. If C = 10^-5 F, what value of R is required if v_o = dv_i/dt Assume the operational amplifier is ideal.

We want to store sufficient energy in a .01-F capacitor to supply 5-hp for 1 hour. To what voltage must the capacitor be charged? (1 hp=745.7 watts). Does this seem to be a practical method for storing this amount of energy? Do you think that an electric automobile based on capacitive energy storage is feasible?

Hi, I am a bit confused with this question. I don't know what I'm doing wrong, but I keep getting the wrong answer. Question: Three capacitors (4.0, 6.0, and 10.0 uF) are connected in series across a 50.0 V battery. Find the voltage across the 4.0 uF capacitor. Answer in Volts

What is the maximum wavelength of light that will lead to photoelectric emission from copper. The work function of copper is 4.5eV.