In the standard model, the elementary particles include, six favors of quarks, up, down, bottom, top, strange and charm, six types of leptons, electrons, electron neutrino, muon, muon neutrino, tau and tau neutrino, twelve gauge bosons, the photon of electromagnetism, the three W and Z bosons of the weak force, and the eight gluons of the strong force, and the Higgs boson. There are various extensions of the standard model that predicts the existence of other elementary particles.

Composite particles, such as protons or atomic nuclei, are bound states of two or more elementary particles. They include all hadrons, a group composed of baryons and mesons. An example of a composite particle is a proton. A proton is made up of two up quarks and one down quark. 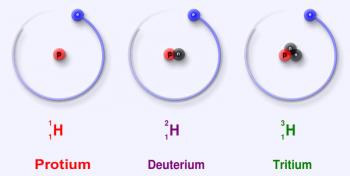 An isotope is a variant to a chemical element.

Nuclear forces are the force between two or more nucleons.

De Broglie wavelength associated with a particle having kinetic

Variation of Range Projection with Angle of Projection

Number of microstates for a system for Bosons and Fermions

Coordinates of a Point on T Shaped Structure

Find the gravitational force of attraction between the two objects below. The red rod on the left has a mass mr and a length lr and the blue rod on the right has a mass mb and a length lb. The two ends of the rods nearest each other are separated by a distance d. Treat each rod as if they were a 1-dimensional collection of po

Two uniform spheres, each with mass M and radius R, touch one another. a). What is the magnitude of their gravitational force of attraction?

A boy at A throws a ball 45o from the horizontal such that it strikes the slope at B. Determine the speed at which the ball is thrown and the time of flight. See attached file for full problem description.

Obtain the Hamiltonian equations of motion.

A particle of mass m moves under the influence of gravity along the helix Z = K* (theta), r = constant where K is constant and Z is vertical. Obtain the Hamiltonian equations of motion.

A particle moves in simple harmonic motion with a frequency of 2.20 Hz and an amplitude of 5.60 cm. Through what total distance does the particle move during one cycle of its motion?

The De Broglie Wavelength and the Wave Nature of Matter

How fast does a proton have to be moving is order to have the same de Broglie wavelength as an electron that is moving at 3.75x10^6 m/s? Units are m/s.

The coordinates of three

Find the maximum particle speed of points on the wire.

A wave travels along a wire at 5 m/sec toward +x. SEE ATTACHMENT #1 for a diagram showing y and t axis system with scale values. PART a. Using information shown on the diagram, write y(x,t) in terms of k and (omega), with numbers for the constants. PART b. When t= 3 sec, and at x= 7 m, find y. PART c. At location x= 2.

Air and Balloon Behaviour and Characteristics

Two balloons one large and the other small, are filled with air. They are inter-connected. Immediately, air flows from the small balloon to the large instead of the other way round [as would be the case of water]. Explain.