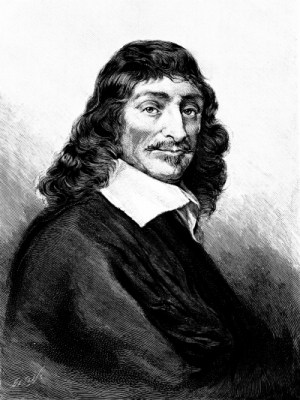 For many, the first thing to come to mind at the mention of Rene Descartes is the famous quote, "Cogito ergo sum", or in English, "I think, therefore I am". While this fundamental truth is exceedingly important in itself, it also represents a change in focus from questioning what the true state of the world is to what you as an individual can be certain of that bespoke a huge shift in Christianity in the medieval times. All this, Prior to Descartes’ ideas in philosophy, thinkers had chiefly looked to uncover what reality is for everyone under the implication that there exists a creator or creators who set this objective truth for us to uncover. Descartes’ new focus on critically determining what a person can be certain of puts humanity in the role of the one who decides what is true rather than any creator god. Unfortunately, Descartes held off publishing much of his work on the subject after hearing of Galileo’s fate, but the extracts, published as the famous introduction Discourse on the Method (Discours de la Métode) and 3 essays, including Geometry (La Géométrie) which was to forge his legacy in mathematics. Descartes’ Discourse changed the face of philosophy, bringing a more mathematical line of thought into philosophical arguments via four carefully-outlined rules of philosophical investigation and numerous applications of them. The entire work was published later, as well as Principles of Philosophy and Meditations on First Philosophy, the latter of which is still in wide use for university philosophy courses today.

The implications of Descartes’ works range far and wide and have done a great deal toward unifying the natural sciences, and some social science too. And all this, it is reported, came to him in a vision at the age of twenty-three when he shut himself in a stove room to fend off the cold (Caroll, 2004).

How does Rene Descartes go about trying to decide what he (and therefore we) can know for certain? Descartes admits that he cannot be sure that God is not playing some sort of trick on him. So because he believes that God is good, he knows that God would not deliberately deceive him?

As I learn more about the mind/brain connection, I am wondering what experts would think about how you think Rene Descartes would view this mind/brain research? How would feminist Eve Cole? I'm curious about these 2 because of the differences so it would be great if you had an understanding about the 2 of them to help me.

With reference to the attached articles (Meditations 1, 2 & 6): 1. Is Descartes a skeptic, foundationalist, rationalist, empiricist, a real-world skeptic? An idealist? A realist? 2. What is Descartes reason in Meditation VI for saying that there is a material universe outside of his mind, and that science will eventually

Is Descartes' argument against trusting the senses a good one? What appeals to you most, and what do you find odd?

1. Explain and discuss the cogito argument in the Second Meditation. What is the cogito argument? What does it try to show? What epistemological and metaphysical conclusions can the meditator derive from the cogito? In what ways is it connected to the rest of Descartesâ?? project? Is it enough to resolve any of the skeptical do

Descartes' Argument for the Existence of God

Briefly explain Descartes argument for the existence of God as presented in Meditation V.

The role of the demon argument in the First Meditation

1) In your own words, briefly explain how Descartes came to be so much more certain of himself as a thinking consciousness ("I think therefore I am") than he was of the physical reality of his everyday world. You sit at your computer now but how can you be sure that it's real and you're not actually dreaming instead? 2) C

What is Descartes doing in his first and second meditations? How does he come to consider as false everything which offers only the slightest reason for doubt and how does he come to the conclusion that he is a thinking thing?

I think therefore I am - Descartes

Please explain the bumper sticker "I bitch, therefore I am." Compare it to the philosophy of Descartes' "I think, therefore I am." How are they different? Why is it easier for women to answer this question than men? Descartes was searching for something that would validate his existence. He needed something to hang on to tha

Descartes is careful to explain the "Cogito," or "I think, therefore, I am," and exactly what is meant by this claim. He discusses if he can be sure about being awake versus being asleep. Descartes thinks that he can be sure. What do you think? [Reference your book and make an argument (making an argument is important).] T

7. Discuss the meaning of the Cartesian statement "I think, therefore I am." What implications does this statement made by Descartes have for one's conception of reality? Explain in detail Descartes' view that the reality of his own consciousness is the only fact that cannot be doubted.

There is a phrase in Descartes 2nd Meditation ... "this I whom I know" can you explain to me in what way sensation is involved in this phrase? Thank you for your time.

If anyone out there understands the meaning of this sentence I need your help: "The cause of an idea must have at least as much formal reality as the idea has objective reality."....please decipher this for me...if you can, thank you for your time.

If anyone understands Descartes I could sure use some help....I'm struggling with the 4th Meditation...and wondering why the "error" and the fact that it exists seems such a big problem for Descartes...if anyone could answer this I'd be most grateful. Thank you for your time.

I'm sorry...I am so THICK HEADED when it comes to Descartes Meditions...can anyone explain to me in simple language ...What PURPOSE does the proof (that God exists) serve in terms of the STRUCTURE of the Meditations 3 ? Thank you.

3rd Meditation by Descartes is highlighted.

Hello: Can someone who really knows & understands Descartes help me? He's tough for me to understand! Question: Why does he (Descartes) need to prove the existence of God in the 3rd Meditation...and what purpose do you think it serves the structure of the Meditation?

Hello- I'm still muddling through Meditations (I'm up to #3) and I'm wondering why an "unbeliever" (aethiest) like Descartes felt the need to prove the existence of God in this 3rd meditation....I don't get the purpose it serves in terms of the structure of all of this (Meditation).

HELLO: I have just read the First Meditation where Descartes talks about the possibility that we are all dreaming....this stuff is soooooooo confusing! Even supposing that I might be dreaming, what sorts of truths are not doubtful? If anyone is good at this kinda stuff could you explain it to someone like me who is totally conf

HELP! I have just read the First Meditation where Descartes talks about the possibility that we are all dreaming....this stuff is soooooooo confusing! Even supposing that I might be dreaming, what sorts of truths are not doubtful? If anyone is good at this kinda stuff could you explain it to someone like me who is totally conf

Descartes' Meditations in the end of Medieval Thought and the beginning of Modern Thought.

The publication of Descartes' Meditations has been identified as a defining episode marking the end of Medieval Thought and the beginning of Modern Thought. Discuss this view and make clear what particular themes or ideas in the Meditations support this interpretation.