Latin is an ancient Italic language originally spoken by the Italic Latins in Ancient Rome and Latium. 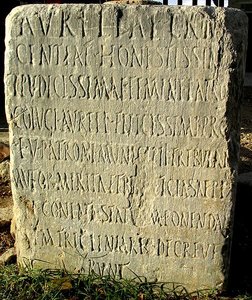 This language is a descendant from the ancient Proto-Indo-European language.¹ Latin is considered a dead language; however modern Romance languages are continuations of dialectal forms of the language. Many students, scholars and some members of the Christian clergy still speak Latin fluently.¹

Latin is written in the Latin alphabet. This alphabet was derived from the Old Italic alphabet which was derived from the Greek and Phoenician alphabet. This alphabet is still used today as the script for the Romance, Celtic, Germanic, Baltic, Finnic and many Slavic languages.¹ The number of letters in the Latin alphabet has varied. When it was first derived it contained 21 letters. However, over time letters were added. Classical Latin did not contain sentence punctuation, letter case or inter-word spacing. Apices were used to distinguish length in vowels and the interpunct was used at time to separate words.¹

I NEED HELP WITH LATIN GRAMMAR

FILL IN THE BLANKS WITH THE CORRECT ENDINGS SO THAT THE ADJECTIVES WILL AGREE WITH THE UNDERLINE NOUNS. VOCABULARY INFORMATION IS GIVEN BELOW. IMMOBILIS,-S, -e IRATUS, -A, -UM MAGNUS, -A, -UM MULTUS, -A, -UM NOSTER,NOSTRA, NOSTRUM OBESUS,-A,-UM OMNI, -IS,-E 1- OMN----------PLAUSTRA(NOUN) IN VIA STANT. 2- TABELLARIU

The use of third declension adjectives

Third declension adjectives: ablative in -i or -e?

A description on the use of complements.

What is a complement and how is it used in Latin?

The differences between transitive and intransitive verbs.

A description of the supine.

What is the use of the supine to denote purpose?

A description and the differences between the past tenses.

What are the differences between the past tense, perfect, imperfect or pluperfect?

A description on the use of the predicative dative.

Please discuss what the predicative dative is and when is it used?

The description of indirect speech.

What is indirect speech and how is it indicated in Latin?

The use of case endings in Latin.

What are cases and why are they used in Latin?