The Roman army survived for centuries through Rome’s Kingdom, Republic and both Empires. Many historians divide the development of Rome’s army into eight phases. 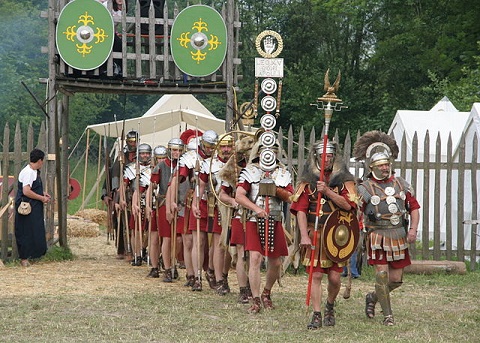 1) The Early Roman army lasted until 300 BCE and existed throughout the Kingdom and the early Republic. This was based on a conscription system.

2) After the Republic formed, the Roman Army of the mid-Republic lasted from 300-107 BCE and experienced a transition from a temporary force based on short-term conscription to a standing army.

3) The Roman Army of the Late Republic lasted from 107-30 BCE continued this transition from the temporary force of the mid-Republic to the mainly volunteer, professional standing forces of the imperial era. Julius Caesar’s works are the main literary source for the tactics of this phase.

7) The East Roman Army lasted until 641 CE after the fall of the Western Empire.

As ancient Rome evolved from the Kingdom to the Republic and both Empires, the army gradually increased the manpower, training and weaponry available. This civilization thrived primarily because of the huge military successes they consistently had along the Mediterranean. This expansionism led to them them becoming one of the largest empires in the ancient world.

In a thorough business plan response for the clothing industry, please answer the following questions. What is the role of the Economies of Scale in the expansion of Gap, Inc into Rome, Italy? How does language and education play a role into Gap, Inc's Rome, Italy expansion?

1) what social, political, and military practices made possible the expansion of Rome from a collection of villages in to a power that ultimately destroyed Carthage in the Punic Wars? 2) What is Pax Romana? what role did Augustus, the first Emperor paly in it? why is Agustus reign referred to as the Golden Age of Rome?

The fall of the Roman Empire and "Roman Peace"

Just so our Study Buddy Group has these two definitions set clearly in our heads...we need a simple understanding of two concepts: (a) What does it mean to say the Roman Empire "FELL"? (b) What does "Roman Peace" exactly mean?

My study group needs help with the following question: : 1. What factors explain why the Roman Empire expanded at times and then failed to expand at other times? Can you help us with the factors? Thanks a whole lot!

The Praetorian Prefects under the Julio-Claudians are described.

Was it a good career path to become a prefect of the Praetorian Guard under the Julio-Claudians? This question is debated.