The Cold War was a rivalry between the USSR and USA from 1945 - 1990 that was played out globally. Some historians actually point to WWII as the beginning of the war, when Stalin began distrusting America and Britain because they refused to invade Europe.

The Soviets saw American rebuilding efforts in Europe and Japan as the United States trying to expand its markets and use that money and power to dominate Europe and destroy the Soviet system. Americans thought that the USSR wanted to destroy democratic and capitalist institutions.¹

From the beginning of the war, the United States had the advantage. The Americans had more money, more power and could provide Europe protection while they rebuilt, while the USSR was busy rebuilding themselves.¹

During the Cold War, Earth was divided into three worlds. The First Word was the United States and Western Europe. The Second World was the USSR and its satellites, while the Third World was basically everyone else.¹

The American response to the Soviets was a policy called ‘containment.’ This was meant to stop the spread of communism by standing up to Soviets wherever they tried to expand. This led to the rest of the battlegrounds of the war. Almost every part of the world was involved in some way. Some examples are the Vietnam War, other parts of Asia, Latin America, Nicaragua, Iran, Hungary and Czechoslovakia.¹ 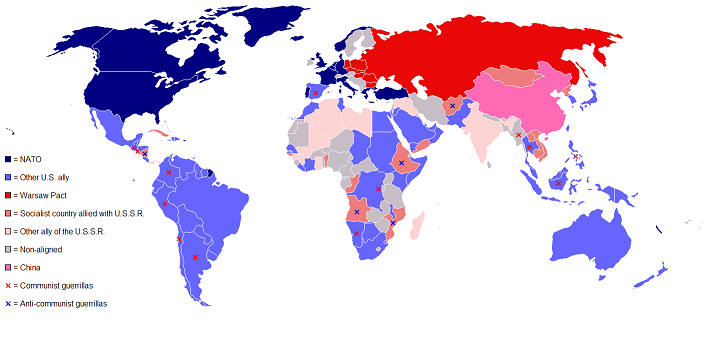 The most important part of the Cold War was the nuclear arms race. Both sides developed an impressive nuclear arsenal that could destroy the human species. Eventually these arsenals grew so large that the USA and USSR agreed on a policy of mutually assured destruction. This was very expensive for America. For instance, they spent 13 billion dollars in building up Western Europe for the Marshall Plan.¹

Misperceptions in the Cold War

How did ideology, leadership and misperception play into the Cold War?

The Causes of the Cold War

Hello, I am looking for assistance with these two questions. Would someone please help me get started? I have so much going in my head and can't narrow this answer down. Please also cite the answer. Select a Homeland Security issue (terrorism, drugs, human trafficking, counterfeiting, counterintelligence, or another)

Collapse of the Soviet Union

Cold War Proxy of the Soviet Occupation of Afghanistan

I need as much information to write a short paper consisting of at least 600 words. First to define the cold war and identify the Soviet occupation of Afghanistan as a proxy war. Describe the events of that war, and explain how it is a proxy war for the Cold War between the United States and Russia. Using realist or idealist the

San Francisco police cited several factors they say contribute to African Americans accounting for about half of all felony arrests in the city, where they are less than 8 percent of the population. In 2005, 1 out of 3 arrests of black people involved narcotics. San Francisco's high black arrest rate is not of recent origin: 20

Please provide an overview of the Cold War?

As we look at America's status after the Cold War, let's explore a few questions. What enduring vulnerabilities are built into the status of being a "superpower?" What about being the only superpower in the post-Soviet world?

Cold War and the War in Vietnam

Complete the following sections of the America and the World Presentation: - 2 to 3 slides: Explanation of the political, military, and social outcomes of the end of the war in Vietnam. - 2 to 3 slides: Comparison of Nixon's Detente policies to previous Cold War strategies. Please provide speaker's notes.

How did the end of the Cold War affect the status of America as a military power? Response should be a minimum of 300 words plus reference.

Discuss the role of Communism in Cuba during the Cold War and its impact on the world powers.

Choose one of the following options: Option 1: Duck and Cover The Library of Congress lists the 9-minute 1951 movie Duck and Cover as one of the most significant films of all time. Produced by Archer Films, the film was designed to teach children what to do in case of a nuclear attack. View the film at this website: w

The Cold War and U.S. Diplomacy

Please help with developing the following questions: The Truman doctrine situation that required U.S. diplomatic efforts during the president's time in office. -Explicate the diplomatic doctrine the president followed, with reference to specific actions or events that occurred. -Describe the effects of these diplomatic effo

The Soviet Union and the Cold War

The political cataclysms of the 20th century dramatically changed the world we live in. Among other things, World War II followed by the Cold War affected American foreign policy, economic and political realities, our interpretation of equality and security, as well as the climate of ideas in the West in general. What role di

In World politics, and as relate to international relations, what do you think the book "Spy Catcher" is talking about.

Identify and describe two events that led to / and or deepened the Cold War.

How did the policy of containment place the United States at the center of international conflicts? What impacts did the homecoming of millions of GIs have on the United States? What happened to Rosie the Riveter? Why did the United States contribute to the reindustrialization of Germany and Japan? Why did America fund the

Discuss the misconceptions made in Bay of Pigs invation and why the project failed.

Review the origin and development of Cold War and how it ended and what were the events that occurred and its implications on the world especially Europe.

I would like some valuable and consistent points that will help me elaborate a pertinent essay of a good standard on this topic. Please I would like the suggestions to be not less than 3000 words since it will be a long essay. I still have other topics at the end I will have to pick the best ones and elaborate them. Please try t

collective security agreements, Wilson, League of Nations, Nato, Seato, UN, Warsaw Pact... what were the purposes of these, did they work? What dangers are in these? For the answers to these questions, please download now!

An antecedent to the world situation at the time of the Vietnam War was the first collective security agreement: the League of Nations (1919-1946). President Woodrow Wilson had broken new ground in international relations when he proposed the League of Nations concept in 1919 at the Treaty of Versailles negotiations that followe

Lessons Learned from Cold War and What to Do

1. What were the lessons learned by Americans confronting a global crisis? 2. How did the cold war define the mission of the United States at midcentury?

I need assistance with these questions from my Sociology class. I know that there are three essential conditions of war cultural tradition, incompatible objectives and sparks that cause nations to engage in war. I also know war has been common throughout history. I believe the United States may engage for political reasons, or fear of being targeted, or we are just aggressive. I am not sure why and after reading my text "Social problems a down to earth approach 10th edition" it is still not clear as to how to begin this one page essay. However, I need assistance thinking about these questions with resources: Part 1 Do you think that the United States has the right to intervene in another country to protect our economic or political interests? Under what conditions is intervention justified? Part 2. Do you think that other countries have the right to intervene in the United States to protect their economic or political interest? Under what conditions is intervention justified? Explain Part 3 Summarize

Life during the Cold War

Maximum 500 word write up needed and please references as well. Imagine that you were the head of your household during the 1960â??s Cold War Era. What preparations would you have made to keep your family safe?

How did Reagan's greater defense budgets help end the Cold War? Or is there no correlation between the two? In addition, should a discussion on Reagan's role be limited to spending? What other factors about Reagan should be considered as well?

Where Historians Disagree: Origins of the Cold War in American History

Identify and analyze at least two events from the Cold War.

Identify and analyze at least two events from the Cold War. Then assess how these events affected the relationship between the United States and the Soviet Union. Make sure you use enough details to support your answer.