Poetry is a form of literature that traditionally has a specific structure of rhythm and metre in order to invoke emotion in the reader. Though blank verse and freeform poetry also exists, it is typically still distinguishable from prose at least by format on the page as most lines will not take up the full width of the page. Poetry tends to be shorter than novels, though epic poetry that far outstrips the usual wordcount of modern novels cannot be forgotten.

The structure of traditional poetry consists of lines, which then form a stanza (like paragraphs).  For certain types of poetry, each line must have a specific number of metrical feet (beats) or feature a rhyming pattern - for example the structure of a Shakesperian sonnet is quite rigid, demanding fourteen lines of alternating rhymes that end in a rhyming couplet which skew the poem's meaning at the last moment. Like other forms of literature, poetry can have genres as well. These genres include heroic poetry, dramatic poetry and narrative poetry. 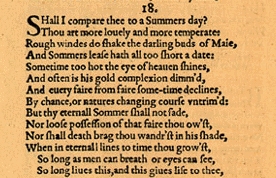 Poetry is often grouped chronologically into two time periods: the modernist period or the classical period.

Modern poetry has been written between the years 1890 and 1950, most specifically in either North America or Europe.   Modernist poetry has new features that is not traditionally in poetry, such as different line breaks or symbolism to invoke emotion in events that were not relevant until the specified time period.  An event in the modernist time period was World War I and there is much poetic literature that comments on these world wars in one way or another.  As the modernist period is more recent than the classical period, modernist poetry uses more current language.

As not all authors wrote in the same language of course; translated poetry has become widespread to allow anyone to enjoy the works of foreign authors.  The act of translating any language to another is very difficult, as there are idioms that do not have the same meaning in the new language as they do in the original language and word lengths and connotations may vary greaty so translated poetry is often not as effective in the new language. However, there have still been a number of great successes in translation of poetry.

In the following two scholarly articles, the authors discuss their views on whether Edgar Allan Poe was racist...or not. Lee argues that Poe was a racist in his article "Absolute Poe: His System of Transcendental Racism". Kennedy and Weissberg argue that Poe was not racist in their article "Romancing the Shadow: Poe and Race

Guilt in Poe's "The Tell-Tale Heart"

From the perspective of the prosecutor, this posting infers his argument regarding the narrator's guilt in Poe's "The Tell-Tale Heart."

Characters in "Poe's The Cask of Amontillado"

Discuss the personalities of the two characters in Poe's tale "The Cask of Amontillado" to determine who is the antagonist and who is the protagonist in the story.

Using Zora Neal Hurston's "Poker!" and Arthur Miller's "Death of a Salesman." provide a description of each of the following parts: exposition, rising action, climax, falling action, conclusion (resolution). For each play, answer the following: 1. What do you think is the central-most conflict in this play? 2. Pick a charac

Give your interpretation of T.S. Wilson's "The Love Song of J. Alfred Prufrock."

Poe's "Masque of the Red Death"

Meaning Emily Dickenson's "Because I could not stop for Death"

Who was Emily Dickinson? What was her lifestyle? Writing style? What did/does she represent? Discuss some of her works.

A personal interpretation of Blake's "The Tyger" is offered.

"Ode on Intimations of Immortality" feedback

A reader response interpretation of Wordsworth's "Ode on Intimations of Immortality" is briefly offered.

A brief, personal interpretation of Blake's "The Lamb" is included.

Paganism and Christianity in "The Seafarer"

Hello again, Your help is helping me immensely, I just had a few more questions. 1) You mentioned investigating religion to support the notion that the poem could be read as a dialogue. Could you give more specific details and examples of that? I understand the concept, it would just help to know where to look in the poem

Orality and Religion in The seafarer

Hello, Thank you very much for your help, it clarified a lot for me and gave me further insight. I do have some points I was wondering if you could expand on to help me understand a little better. 1) The shift I had mentioned is key, as it is dramatic as you explained, can you be more specific about how the poem shifts? F

"The Seafarer" as a Dialogue

Hello, I am examining the Anglo-Saxon poem, the Seafarer, and the idea that the poem could represent two separate voices acting as a dialogue between a young seafarer and older seafarer. The poem shows a drastic change midway through, leading to the idea that the content could be a dialogue. Trying to understand and see thi

The Seafarer and The Wanderer: Exile Themes

1. Can you explain and give references from the poems (quotes, etc.) how the two poems examine exile through emotion and what emotions accompany exile in the two poems? 2. What circumstances have forced the men to go into exile? 3.What are the exile lives like? What do each of them see and hear that help examine the exile

Please provide assistance selecting a scene (Act 2 Scene 1) from "12th Night" and rewriting it with a modern twist, the genre can be changed to (realistic, science, fiction, teen drama, action blockbuster, etc) but the basic character traits and plot needs to remain the same. I have to rewrite the scene using modern language and

Readers associate Victorianism with extremes of doubt and faith. Major Victorian poets certainly reflect these extremes, ideas which continue to circulate in our own century. Indeed, one may argue that the Victorians covered most of the bases with which we find ourselves preoccupied today. As the essay itself points out, "Belief

Critics have long questioned the exact nature of Gerard Manley Hopkins' religious attitude. The essay "Pantheism in Hopkins" presents a viewpoint entertained by something less than a consensus of readers of Hopkins' verse. The paper posits that pantheism, or at least a version of it, permeates Hopkins' admittedly Catholic perspe

Emotion and Reason in The Aeneid

As with the Iliad and Gilgamesh, emotion drives certain characters to behave irrationally in the Aeneid. Which characters in the story are motivated by emotion, and which are not? What are some of the key passages related to emotion? What appears to be the general attitude toward emotionally driven behavior in the poem? What mig

Gawain and the Green Knight Themes

The primary theme of a literary work is built into many different facets of its composition. Draft a phrase describing a main theme of Sir Gawain and the Green Knight. Find passages (list them by line number and brief quotations) in which the poem encodes that theme in (1) an image, (2) a statement, and (3) a plot event. Type th

Homers Illiad: Beginning with the opening lines of the poem, Achilles is often driven to action or reaction by his emotions. Which emotions drive him at various points in the narrative? Which events trigger emotional outbursts? Which characters intervene to prevent Achilles from over-reacting out of emotion, or to attempt to pe

"The End of Love" by Lorna Crozier

The End of Love - Lorna Crozier I can phone him any time, he says, though most mornings he's in the garden. The days are sunny now, mid- July, and there's weeding to be done. I'm sick with worry and a thousand miles away. He says he's getting better, the infection in his eyes is clearing up though he fo

Analyze an assigned poem for English courses. Students are often frustrated when asked to analyze a poem. There is a simple step-by-step process anyone can go through to make a good analysis for your English professors or high school teachers. In this solution I will show you how to write a worthy analysis for a poem.

My Papa's Waltz by Roethke & Alcoholism

Discussion focusing on the poem, "My Papa's Waltz" by Theodore Roethke. What strikes you about this poem? What do you notice about the imagery? Find one strong image in this poem and discuss it in length.

Character Contrast in Not Without Laughter

I had a major spinal cord surgery and I'm unable to sit up to do any reading, I am in excruciating pain. So I'm asking that you please help me with the following questions in order to complete my essay. How do the characters in Langston Hughes' Not Without Laughter use definition by comparing and contrasting?

The Rime of the Ancient Mariner

The Rime of the Ancient Mariner by Coleridge I fear thee, Ancient Mariner, "exclaims the Wedding Guest. I need to create a thesis and then identify two causes for fear anyone who heard the Mariner's tale might have