English as a Second Language is the use or study of English by those were not raised with English as their native language. People who are learning English face many difficulties, which include pronunciation, grammar, 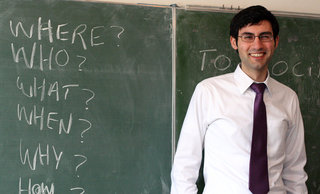 vocabulary, and the differences between spoken and written English.¹

The pronunciation of English is difficult for English language learners.¹ English contains a number of sounds not present in some languages. Speakers of languages without those sounds may have problems both with hearing and with pronouncing them.¹

Languages may also differ in syllable structure. English allows for up to three consonants before the vowel sound and five after it. Japanese, for example, alternates between consonants and vowels making it hard for Japanese people to grasp English pronunciation.¹

English has a large number of tenses with slightly subtle differences that make it hard for non-native English speakers to master. Modal verbs also make it extremely hard for English learners to master English. Modal verbs include ‘have to’, ‘has to’, ‘will’, ‘shall’, etc.¹

The differences between spoken and written English are also difficult for English learners. Written English tends to be more formal than spoken English.¹

Describe two experiences where you have seen monitoring and adjusting of instruction that met the needs of students. What worked in this situation and how can you apply what was learned in future practice?

Communication Ideas for the ELL Parents, Teachers, and Students

Creating and maintaining relationships between home and school are pivotal to the overall success of our ELL students. Discuss some ways you might cultivate these partnerships throughout the school year.

As a primary teacher, how would you tell a parent that you are referring their child to the Child Study Team? What data would you use to support your concerns? Who else would you involve in the discussion?

Find and analyze an Adult ESL course or lesson online; (include Internet address). Write a brief summary of the course, unit, or lesson, including the anticipated grade or content level. Based on your analysis of the content; develop 5 (TCOs) terminal course objectives for the lesson using the ABCD (audience, behavior, condition

Reading comprehension is required for such daily activities as understanding the news in the newspaper, reading signs along the road, and reading and responding to emails. In today's society, most standardized tests recognize this and require students to answer comprehension questions about what they have read. This can be trick

Develop a list of activities that you would incorporate in your classroom to meaningfully involve family members of children who are culturally or linguistically diverse.

Write an essay of 1,250-1,500 words explaining and describing how language abilities and deficiencies impact literacy development for children birth to PK and K-3. Use real-world examples to illustrate your points. Research a minimum of four scholarly sources Prepare this assignment according to the APA guidelines found i

Here is 3 files one that titled ESL learners is my action research while the other two files is the professor guide. Feel free to revise my action research question or write better one, the same thing for titles , cover page etc I'm master student & I prefer someone who has great writing skills & related major. I'm expecting APA

Language Learning and the Definition of One's Social, Cultural

Article Review Presentation and Response Assignment 1) Read the abstract and summary, so that you know what you are reading before you start; then read the article. 2) Briefly (in a paragraph or so) answer the questions: a. What is the major argument of this article? b. How do authors develop their argument? c. Is the

Pros and Cons of Working as a Special Educator

What are the pros and cons of becoming a special educator?

Design a series of three activities for parents and students at your school that honor and respect cultural diversity. Your plan should include the following: a. Explain the purpose for each activity b. Describe the target group you are addressing c. Explain the activities d. Describe the materials/resources needed to e

How can an ESL teacher help a student learn English?

Put yourself in the shoes of a student learning English. You have been in the United States for a short time and no one at your school speaks your language. What would you need from the teacher to make input comprehensible? What could the teacher do to scaffold lessons for you? How can the teacher effectively lower the affe

Types of students that benefit from each different program

Critique of an ESL Curriculum Article

Find two articles of current trends in the areas of curriculum planning, curriculum evaluation and curriculum materials of teaching English as a Second Language to be critiqued. A complete reference and a brief overview of the specific article should be given as well.

Imagine for a moment that, in your community, there is a negative reaction toward English language learners and the prevailing comments you hear echo the notion, "They've been here their whole lives. Why haven't they learned English yet?" What is your response to these community stakeholders? What might you need to change ab

What should teachers do to assure the integration of English language proficiency standards into all content areas? Provide examples and support your response with research. (ESL Students)

Describe various learning technologies and then discuss the technology you would use to assist English as Second Language (E.S.L.) learners within the math classroom. Explain how it would enhance their learning and provide differentiation while maintaining the necessary skills practice.

Bianca is an eight year old who was orphaned by a devastating tsunami in Indonesia at the age of five. Bianca was recently adopted by an English speaking family in Indiana and enrolled in third grade at James Madison Elementary. Her native language is Bahasa Indonesia and her adopted family only speaks limited phrases of this la

Arranging the classroom for ELL students

ELL students can be visual learners, auditory learners and the differing ways students attain information best is really important to keep in mind, when staging an appropriate classroom style. Much of the research related to second language acquisition indicates that linguistically diverse children learn higher-level cognitiv

Strategies for Teaching in an ESL/ Bilingual Classroom

Keys to Success...Strategies For Teaching in an ESL/Bilingual Classroom.

Describe trends in various instructional settings and modalities that you expect to see in the next 10 years and explain your rationale for selecting these trends.

Describe trends in various instructional settings and modalities that you expect to see in the next 10 years and explain your rationale for selecting these trends. The trends I decided to look at are: 1. Growing need for ESL instruction 2. Technology integration 3. Individual to social

Learning Vocabulary in the ESL Class

English as a Second Language program

How would sheltered English classes be different if they were part of a bilingual versus an ESL program?

The effects of mainstreaming children are demonstrated briefly.

Please help with the following problem. Provide at least 300 words in the solution. I need help with developing a standardized test for these students. I am trying to find out whether students score better on standardized tests when they are mainstreamed?

I need 3-5 ESL pedagogic objectives that are based on the pedagogical theories, principles, and practices for four 6-year-old ESL students who use the picture dictionaries, CDs, workbooks, and Easy Readers in the classroom. **The 6 year old ESL students can read Easy Readers for their age very well. Their phonics are pretty s

Pls. read the attached word document (ESL) and answer the followings IN YOUR OWN WORDS: 1. List 3 ideas from the readings that are interesting to you and why. 2. List 2 ideas you are concerned with or wonder about. 3. Describe the following terms with your understanding of how they apply to ESL instruction: a. E