Program execution has nothing to do with cancellation or termination. All programs are essentially sets of instructions for a computer to carry out, and that act of carrying them out is known as execution. Each instruction may cause a number of actions to be taken by the processing machine, with effects that can affect any number of components of that computer, depending on how the instructions were written. The systems that do the executing for a machine are known as interpreters as they read the code in and follow its instructions. A human typing commands into a terminal is an example of an interpreter in action, interfacing between the human input and the processor, but programs may also execute in batch processes without any human interaction necessary. Interpreters can be held in contrast to compilers which perform a translation of the code a programmer writes into a more low-level language that can be directly executed by a processor much more simply and quickly than the original high-level sourcecode. The file produced by a compiler this way is often called the executable. 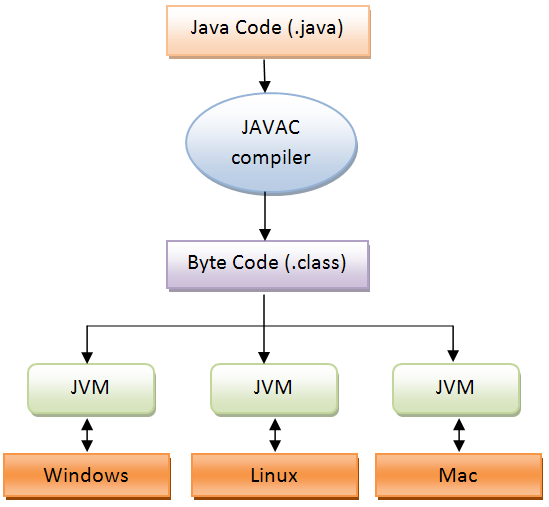 The compiling process to get an executable for 3 common OSes from a program written in Java.  Image credit Loboh.

As only a few types of programs are executable on a bare machine, most programs are designed with assumptions, both implicit and explicit, about the resources available for execution. The presence of an operating system is almost always a safe bet, and most programs do rely on the support of such a system at the very least. Run-time libraries specific to the language the program is written in are another thing programs tend to rely on access to which are not supplied by the computer from factory settings.

Derive an election algorithm for bidirectional rings that is more efficient than the ring algorithm: The ring algorithm assumes that the links are unidirectional and that each process sends its message to the neighbor on the right. The main data structure used by the algorithm is the active list, a list that contains the prio

1. Why would you want to overload a method? 2. Identify other instances where overloading would be helpful.

What are the fundamental stages of an enterprise system life cycle? How is this different from a traditional software development life cycle (SDLC)? How can you define and distinguish between ERP configuration and customization? Why is this important to the success of the implementation project? What makes project/program

Describe the importance of documentation under an systems development life cycle (SDLC) methodology.

What are some capabilities of Microsoft Excel and how might you use them in a professional capacity? In what ways have smart phones that incorporate wireless technologies changed the business landscape?

1. Describe three approaches to organizing programming teams. For what types of projects or development activities is each approach best suited? 2. How does implementing a maintenance change differ from a new system development project? 3. List and briefly describe implementation phase QA activities other than software tes

C program to read strings from a file and uppercase them

I need some guidance writing a program in C code that reads a lowercase string of characters from a text file named "data.txt", then duplicates the string in uppercase characters and displays both, the original lowercase and uppercase strings.

Speed of execution of application programs

As computer word size gets larger and larger, there is a law of diminishing returns: the speed of execution of application programs does not increase and may, in fact, decrease. Explain why this can occur?

Can scope creep be good for a project?

There is a school of thought that argues that, far from being undesirable, some degree of scope creep may in fact be beneficial for certain types of projects e.g. it encourages stakeholder engagement, indicates responsiveness, and shows that objectives and WBS tasks are being regularly re-evaluated and re-aligned. The only cavea

Please help me with an assignment by answering the following: Does EPM actually significantly change the way individual projects are managed, or does it just simply affect how they are selected and prioritized by management, at a strategic level?

What is Enterprise Project Management (EPM)? How does it differ from conventional project management?

Could you define safe state systems?

Companies sometimes purchase expensive applications, and then under-utilize or misuse these. In a sense, the economic downturn has been beneficial, as many companies are beginning to more regularly scrutinize the programs they are investing in, to confirm they are purchased for the right reasons, and used more effectively. Ha

Algorithms to Print the Daily Salary of a Worker

Develop two algorithms (one iterative and one recursive) to print the daily salary of a worker who, each day, is paid twice the previous day's salary (starting with one penny for the first day's work) for a 30 day period. What problems are you likely to encounter if you implement your solutions on an actual machine?

Some organizations feel that IT planning is a waste of time.

Some organizations feel that IT planning is a waste of time because the competitive environment and technologies change too rapidly. They argue that their plans will be obsolete before they are completed. Briefly discuss/explain why you agree or disagree with this.

Write a C program that prompts the user to enter data regarding some clients, and then sorts the input data on various fields.

Write a C program that prompts the user to enter data regarding some clients. The user should be prompted for client account number (a UNIQUE positive integer between 1 and 1000), a name (a string, up to 25 in length), and the account balance (a positive floating point number) for each client. The user input terminates once

Write a Little Man Computer (LMC) program that accepts three values as input and produces the largest of the three as output.

Write a Little Man program that prints out the odd numbers from 1 to 99.

Write a Little Man program that prints out the odd numbers from 1 to 99. No input is required.

Why is monitoring project progress so important to project plan execution?

Write a program "oneway" which implements a one-way communication between a parent process and it's child using a pipe. The parent takes a message (from the command line), sends it to the child (through the pipe), and the child displays the message. The program has just one argument on the command line (the message). An

Examples of threats, vulnerabilities, and exploits

You answered a previous posting today (attached answer). I was wondering if you could please help me again with a couple of questions. Is the DNS modification taking place on the user's system or actually on a DNS server? Do you know of any other 'modifications' it makes?

Examples of threats, vulnerabilities, and exploits to networks

Research a current computer threat. Describe the nature of the threat and the potential repercussions it could have for a network. Some suggested sites with which to begin your search are: http://www.symantec.com/home_homeoffice/index.jsp http://www.mcafee.com/us/ http://www.microsoft.com http://www.cnet.com