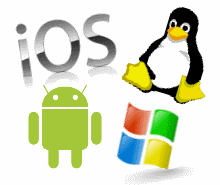 Operating systems mostly act as the middleman between a computer's programs and its hardware. Although many applications do interface directly with the computer's hardware, operating systems are needed to bridge gaps between them in issues like input and output (keyboard, mouse, speakers, and even internet components) and memory allocation. Operating systems are also the software that handles interrupts, delivers certain services as a result of an operating system (OS) call from the program, and multi-tasking. In truth, computers can seldom perform more than one or two actions at once so an OS is needed to split the processor time between programs, down to mere fractions of seconds, so that it appears to things are happening simultaneously to the user. Processor time is just one of the resources an OS must manage to allow for an efficient, clean experience on the user end - mass storage, printing and many more are dependent on the OS's 'choices'.

Because of an OS's time and resource micromanaging/accounting capabilities, most application programs rely on an OS to function. For this reason, almost everything that is a computer has an operating system of some kind. Well-known examples of today's world include Android, BSD, iOS, GNU/Linus, OS X, z/OS, QNX and Windows. All of the listed share roots in UNIX, save z/OS and Microsoft's Windows.

Networking is when computers exchange data between them.

The computer memory is the physical device used to store information.

CPU utilization refers to the level of CPU throughput.

Interrupts are commonly used techniques to for computer multitasking.

A file system is a type of data store which can be used to store, retrieve and update a set of files.

Execution is the process by which a computer or a virtual machine carries out the instructions of a computer program.

The user interface is the space where interaction between humans and machines occurs.

Multitasking is when multiple tasks take place at once.

Flags for controlling applications' access to a shared resource during multi-tasking.

Calculate the overall speedup that spends 40% of its time in calculations with a processor upgrade that provides for 100% greater throughput.

Create a table for customers. The manager tells me that this table needs to track the following information: all customers' social security number, first and last name, address, city, state and zip code, email, phone number, birth date, and date of applying for a library card. Your task is to first "sketch" a customer table (bas

Discuss environments where heightened levels of security are required. Are any of the security measures used in these environments foolproof? Why or why not?

Why use a Windows NT/200x domain at all, if users are only sharing files and printers?

What are the benefits and hazards of data mining? Please give rationale for your answer.

Reality Gets Better Many of us are familiar with the concept of virtual reality, either from films like Avatar and The Matrix, or from science fiction novels and video games. Virtual reality is a computer-generated, interactive, three-dimensional environment in which people become immersed. But in the past few years, a new sp

Application of Law of Total Probability

Consider a system that generates 10 million audit records per day. Also assume that there are on average 10 attacks per day on this system and that each such attack is reflected in 20 records. If the intrusion-detection system has a true-alarm rate of 0.6 and a false alarm rate of 0.0005, what percentage of alarms generated by t

How many minimum-length Ethernet frames can a 10-Mbps switch port forward in one second, assuming no collision? The answer is 14880. Show the calculations that will yield the answer provided. Do not forget to as the Inter-frame Gap after each transmitted frame.

How long does it take to transmit a 10baseT Ethernet frame that contains 256 bytes of data? Ignore the interframe gap that follows the frame. 1. Find the total number of bytes in the frame. 2. Convert the total bytes into total bits. 3. Multiply the total bits by the time for one bit. 4. Repeat steps 1 through 3 for a frame

There are many types of computer attacks. Try to search online to find four types which are applicable specifically to WLAN. Finally, try to descript and discuss those types in more details

The Sarbanes-Oxley Act and the Development of New Technologies

The Sarbanes-Oxley Act in the U.S. has greatly increased the compliance obligations of publicly-traded companies. Explain how the landmark legislation affected the obligations of IT departments, and the way in which they develop and implement new technologies.

The Internet: Clouds and Communication Interfaces

1. We often hear about information in the "clouds." What does this mean? How has this concept changed the direction of the Internet? 2. List the benefits and drawbacks to combining voice, video, and data communications into one interface such as Skype.

What is the history of DES, and why is s-DES studied?

Discuss the major drivers and benefits of data warehousing to end users (500 - 750 words with references).

Community library: You recently get a job offer from a local community library. The manager asks you to develop a database system to track customers and the books they check out. Task 1: Your initial assignment is to create a table for customers. The manager tells you that this table needs to track the following information:

Please help with the following problem. Describe one method Financial Websites use to convince a customer the site is authentic. Do hackers do a public service by finding and publicizing computer security weaknesses?

Security Mechanisms at Layers Above IP

If IPSec provides security at the network layer, why is it that security mechanisms are still needed at layers above IP?

1) Please identify and describe the research direction (if any) you want to conduct in authentication and handshake protocols. 2) Please describe any research experience and/or preparation that may support you towards this research-oriented PhD study. My capstone project for the Bachelor's degree was to identify vulnerabi

Choosing a Personal Computer and Components

You have decided to purchase a personal computer system for personal use. You want to be able to do the following tasks on the computer. - Write family correspondence - Maintain an online checking account - Maintain a holiday card list with addresses - Work from home on office computer files - Send emails - Get information

Discuss some of the problems NATs create for IPsec security. (See [Phifer 2000]). Can we solve these problems by using IPv6? Why has deployment of IPv6 been slow to date? What is needed to accelerate its deployment?

Some operating system shells use linefeed characters 'r' as new line characters (such as some Mac OS). When a script containing these invisible characters are interpreted by Linux or *nix shells, they are flagged as errors, since *nix uses 'n' as new lines. For example they might produce the following error: command not found li

How do you think the DNS is important for internet operations? What would happen if the DNS of your company/network or your provider or root DNS fails? What solutions to secure DNS operation do you know?

Draw an IE Crow's Foot E-R diagram for the entities DEPARTMENT and EMPLOYEE and the 1:N relationship between them. Assume that a DEPARTMENT does not need to have an EMPLOYEE, but that every EMPLOYEE is assigned to a DEPARTMENT. Include appropriate identifiers and attributes for each entity. Give examples of binary 1:N relatio