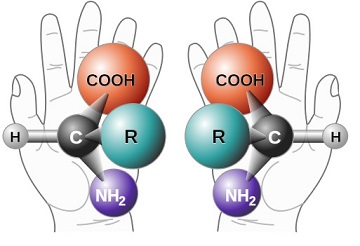 The above amino acid is chiral as if you create its mirror image, it can be seen that these are not identical. Thus, in order to separate non-superposable mirror images, there is an important system to help categorize and identify different chiral molecules. The R- and S- configurations were devised to help categorize molecules based on the priority of the substituents bonded to the center atom. So the first step involves orienting the molecule so that the substituent with the least priority (generally, lowest in atomic/molecular weight) is pointing away from the viewer. Then looking at the remaining three substituents: if the priority decreases in a clockwise fashion, then the molecule will be labeled R; if the priority decreases in a counter-clockwise fashion, then the molecule will be labeled S.

Thus, understanding chirality is extremely important as the concept is heavily involved in a multitude of organic reactions.

Glycine as an Achiral Molecule

I would like a proof for that an achiral molecule that consists of two similar components and two other distinct components are always superposable as for example glycine. I would believe I visual proof would be the most easy approach for me. Thank you! An image of glycine is in the attachment as an illustration.

I have two problems for you. For both, when I put them into newman projections, I don't get the correct "zigzag" for Felkin model and I don't believe either can be synthesized via chelation control using different counter metal ions. Using methods from my notes I can only get the alcohols in the second problem all on wedges. I

See the attached file. Z. Afrer an aqueous solution containing Co(OH)3 and three equivalents of alanine, H2NCH(CH3)C02H2, is heated four neutral, six-coordinate compounds having the formula {Co[(H2NCH(CH3)CO2]3} can be isolated. Two of these compounds are red and have nearly identical absorption spectra, which suggests they h

Stereochemistry of Diols from Alkenes

1. Consider the following ether whose structural formula is: a) Draw the ring in its moststable chair conformation. b) Identify each sterocenter in the molecule. c) Draw different steroisomers of the structure. 2. Identify the following structures as chiral, achiral and/or meso. Decide if the pairs are isomers, stereoisome

Chiral centres in glucose and fructose

Does beta-D-fructose in its cyclic form have the same number of chiral carbons as beta-D-glucose? Show the structural formulas and chiral carbons.