Accounting can be done on either a cash or accrual basis. A cash-basis means transactions are recorded when cash actually changes hands. An accrual basis means that transactions are recorded as they occur, even if no cash is received or paid out. Company's use an accrual basis for accounting because it gives us a better current snapshot of a firm's financial picture. For example, if a firm makes a sale on account, we record the accounts receivable as an asset on the balance sheet and the sale as revenue. If we waited until cash actually changed hands to record the transaction, we would be understating assets and sales in the meantime.

A deferral is an adjustments for which the business paid or received cash in advance. For example, a company typical purchases office supplies over the period. These are kept on the balance sheet as an asset. At the end of the period, we determine how how much supplies we have left. The decrease in supplies is then recorded as an office supplies expense. Deferrals include, for example, unearned revenue, cost of goods sold (under a periodic inventory system) office supplies, prepaid rent, and prepaid insurance. These adjusting entries may look like this: 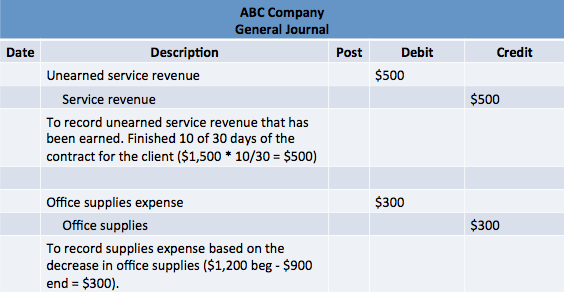 Over time, businesses accrue revenues and expenses that have yet to be received or paid. For example, your phone company accrues revenue over the month, and sends you a bill at the end of the month. On your end, you accrue a phone expense over the month, which becomes an account payable. At the end of the period, the phone company must make an adjustments for this earned revenue, even if the bill hasn't been mailed. At the same time, even if you haven't received the invoice, you know that you've incurred some phone expense based on your contract (maybe its $100/month all inclusive). 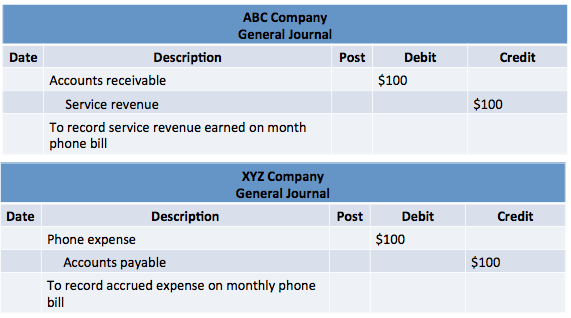 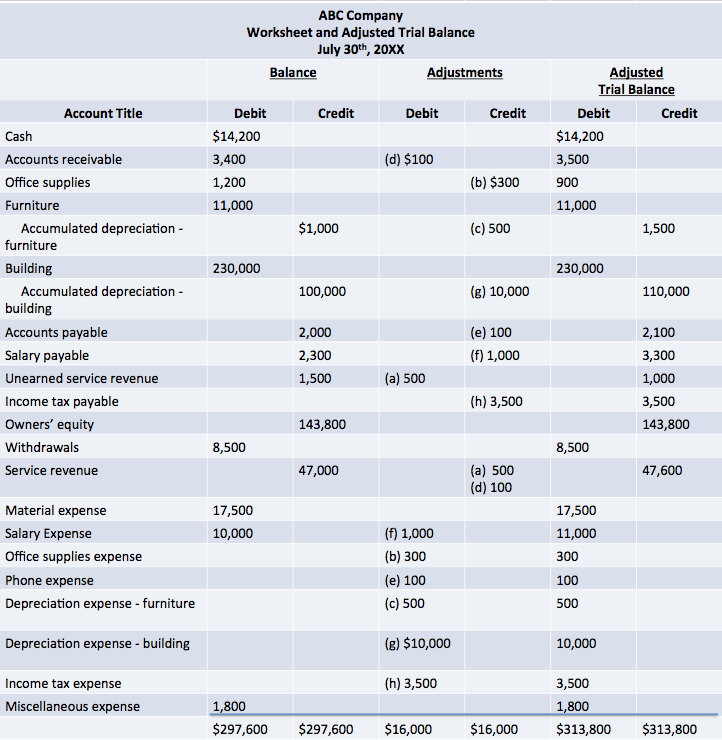 *Note: in our examples above, two different companies were used to show how accrued revenue for one company is an accrued expense for another. In our worksheet, we wanted to show both of these entries (since all companies accrue both revenues and expenses). To simplify things, we pretended our accrued phone expense was for ABC company as well, and included it on the worksheet.

At the beginning of each accounting period, some accountants use reversing entries to cancel out some adjusting entries from the previous period.

Identification of transactions and adjusting entries

Divtek's Variety Store is completing the accounting process for the year just ended on December 31, 2017. The transactions during 2017 have been journalized and posted. The following data with respect to adjusting entries are available: a.Wages earned by employees during December 2017, unpaid and unrecorded at December 31, 2

The ledger of Walters Company includes the following unadjusted balances: Prepaid Insurance $3,000, Service Revenue $60,000, and Salaries and Wages Expense $25,000. Adjusting entries are required for (a) expired insurance $1,800; (b) services provided $1,100, but unbilled and uncollected; and (c) accrued salaries payable $900. E

The following data is given for Zrada Ltd on March 31, 20XX. The firm adjusts its accounts on a monthly basis. a. Depreciation $1,000 b. Prepaid rent expired, $2,200 c. Interest Expense Accrued, $990 d. Employee Salaries owed for Monday through Wednesday for a five day work week; weekly payroll $150,000. e. Unearned Servic

You should provide a list of all journal entries that you record as part of putting together the consolidated financial statements with a clear indication of where the journal entries are posted. They could be posted to Mother Company's books, or in the Consolidation Worksheets (all entries needed for Son and Daughter Company we

Would you be interested in helping me with problem? Problem: The CAB Partnership, although operating profitably, has had a cash flow problem. Unable to meet its current commitments, the firm borrowed $34,000 from a bank giving a long-term note. During a recent meeting, the partners decided to obtain additional cash by admi

Journalizing adjusting entries Laughter Landscaping has the following independent cases at the end of the year on December 31, 2014. a) Each Friday, Laughter pays employees for the current week's work. The amount of the weekly payroll is $7,000 for a five-day workweek. This year December 31 falls on a Wednesday. b) Details

Maine Department Store is located near the Village Shopping Mall. At the end of the company's fiscal year on December 31, 2012, the following accounts appeared in two of its trial balances. see attached for better formatting Unadjusted Adjusted Unadjusted Adjusted Accounts Payable $79,300 $79,300 Interest Payable $

1. In the case of a prepaid expense, the adjusting entry required at the end of a period consists of a credit to Prepaid expense. True False 2. The entry to record depreciation includes a debit to which account? Equipment Cash Accumulated depreciation Depreciation expen

Create adjusting and closing entries. Maine Department Store is located near the Village Shopping Mall. At the end of the company's fiscal year on December 31, 2012, the following accounts appeared in two of its trial balances. Unadjusted Adjusted Unadjusted Adjusted Accounts Payable $79,300 $79,300 In

Since the company is not large enough to occupy the entire building it owns, it rented space to a tenant at $3000 per month, starting on November 1, 2011. The rent was paid on time on November 1, and the amount received was credited to the Rent Earned account. However, the tenant has not paid the December rent. The company has w

An analysis of the company's insurance policies provided the following facts. Policy Date of Purchase Months of Coverage Cost A April 1, 2010 24 $11,640 B

1As the recently appointed auditor for Hillary Corpoation, you have been asked to examine selected accounts before the 6-month financial statements of June 30, 2012, are prepared. The controller for Hillary Corporation mentions that only one accont is kept for intangible assets. Prepare the entry or entries necessary to corre

Explain why adjusting entries are necessary

Which adjusting entries would be appropriate on International Galleries' books?

As of December 31, International Galleries, Ltd.'s general ledger account for Prepaid Advertising Expense had a balance of $10,000. However, an analysis of the account showed that $6,000 of that amount was for ads in the Daily Tribune newspaper that had been published during December. As of December 31, Tribune Newspaper Publish

Adjusting entries are needed: 1. Whenever revenue is not received in cash 2. Whenever expenses are not paid in cash 3. Only to correct errors in the initial recording of business transactions 4. Whenever transactions affect the revenue or expenses of more than one accounting periods.

Preparation of a work sheet, financial statements, and adjusting

See attached file for the problem. On June 30, the end of the current fiscal year, the following information is available to Conti Company's accountants for making adjusting entries: a. Among the liabilities of the company is a mortgage payable in the amount of $260,000. On June 30, the accrued interest on this mortgage amou