In addition to operating income, a firm may have income or losses from other activities. This could result from items such as a gain or loss on the sale of an asset or a gain or a loss from changes in a foreign exchange rate that affects the business. After these profits and losses are included, we call this item earnings before interest and taxes (EBIT).

After this, we typically have a seperate line for interest expense. It is important for investors to be able to look at an income statement and see how much income the business generates in relation to the amount of fixed interest expense the firm must pay. Since taxes are determined on the amount of income left after interest is paid, we calculate this next. Our final line on a typical income statement is net income. 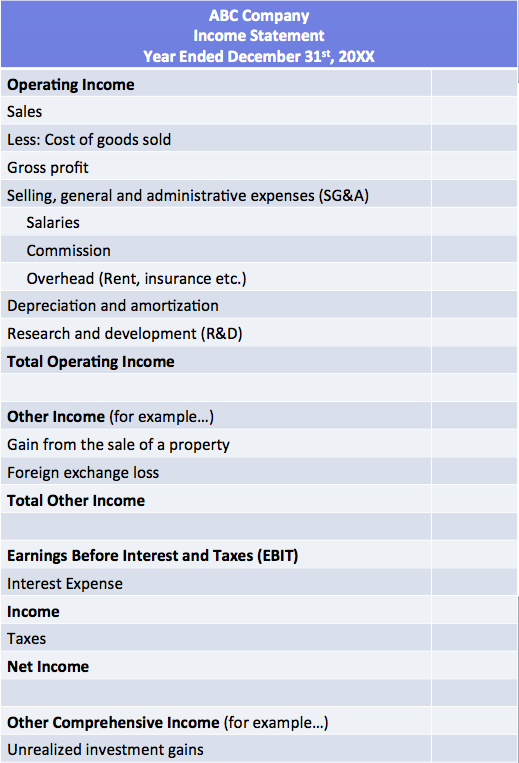 Shareholders get value from their investment in a firm when they receive dividends or the price of their share goes up, called capital gains. A firm can pay out dividends only when it earns an income. Similarly, income that is reinvested rather than paid out as dividends is what contributes to the growth of the firm, leading to capital gains. As a result, the value of a firm to its investors is inherintly tied to a firm's income - most importantly, a firm's future income. That is, the ability of the firm to generate income in the future is the key driver of the fundamental value of a firm.

Because earnings are the key driver of shareholder value, significant attention is paid by investors to the firm's income statement. Net income is the single most important item in the financial statements. The idea is that if a firm that is profitable today, we can assume that it is likely to be similarly profitable in the future. This points to two major drawbacks to the income statement. For one, many projects that a company can invest in have high initial costs, and low initial profitability - that doesn't mean it won't be profitable over the long-term. In fact, you would not want to invest in a company that only invested in projects with short-term profitability, because chances are the firm is missing some highly valuable opportunities that could make money long-term.

Similarly, the income statement is often subject to manipulation. Officers of a company have significant lattitude in determining when and how revenues and expenses are recorded within GAAP. Similarly, officers may bend or break the rules. For example, many people see the high-tech boom, and later bust, as a result of earnings that these firms were recognizing today, but were not reasonably assured. In fact, because of the latitude that GAAP allows for reporting revenue, errors in reporting revenue are the single most common cause of a company having to file restatements with the SEC.¹

Computing Interest Based on Other Amounts

I need help with this please! Examine and analyze The Gaps financial statements and tax notes. Based on your analysis, create a 4 to 5 page report in Microsoft Word document that includes answers to the following questions: How is the information related to the company's deferred income taxes presented? Does the company have

Do you think CAFR can be manipulated to tell the story to puch an agenda. Understanding what can and cannot be included in the budget disclosures seems subjective to those in charge. Thoughts?

Preparation of an Income Statement for The Serious Reader Company The first case of this course provides an opportunity to prepare a segmented variable costing (contribution margin, behavioral) income statement and analyze the information. This is a very small company and the information may seem simplistic at first glance. D

Kim Morris purchased Print Shop, Inc., a printing business, from Chris Stanley. Morris made a cash down payment and agreed to make annual payments equal to 40 percent of the company's net income in each of the next three years. (Such "earn-outs" are a common means of financing the purchase of a small business.) Stanley was disap

Generally accepted accounting principles (GAAP) require organizations to prepare both an income statement and a balance sheet. Before the balance sheet can be prepared, the organization's net income must be determined. This requires the accountant to pull together data from numerous system accounts and other sources of informati

(Use the financial statements provided below to compute the percentages for all items included in the income statement sheet as a percent of revenue. Remember that total revenue is always 100 percent. Be sure to use the formula function in Microsoft Excel to show the formulas for each of the percentage you compute. After complet

Can someone please help me evaluate an Income statement? What does it tell you about the company? How is it regulated and provide examples? Why is it important? Who uses it and why? Please 250+ words. Thank you!

Income Statement and Vertical Analysis of the Statement

Currently Attic is charged $3,164,000 Depreciation on the Income Statement of Andrews. Andrews is planning for an increase in this depreciation. On the financial statements of Andrews will this?: - Increase Net Cash from Operations on the Cash Flow Statement. - Just impact the Balance Sheet. - Have no impact on the Net Cash

Currently Chester is paying a dividend of $19.34 (per share). If this dividend were raised by $3.64, given its current stock price what would be the Dividend Yield? See attachment.

On August 1, 2014, S Khan invested $90,000 in her new company, Khan Company. During August, he made $10,000 of withdrawals from the business. The amounts of the various assets, liabilities, revenues, and expenses are as follows: Accounts payable $ 9,000 Accounts receivable 26,000 Cash

Describe three specific items that are "nonowner sources" included as Other Comprehensive Income.

Please help with the following problem. Please provide step by step calculations when needed. Determine the asset turnover ratio for 2004 and 2005 using the information contained in the consolidated balance sheet and income statement for the Target Corporation in Appendix A. (See the attached file for data). Would you

Direction: 100 words Identify a for-profit college and see if you can access their annual report/financial reports. University of Phoenix is an option recommended. Can you find any financial reports? If so, what do you observe?

Sales-related and purchase-related transactions for seller and buyer

The following is a listing of some of the balance sheet accounts and all of the income statement accounts for Mulberry Street Sportswear as they appear on the 12/31/11 adjusted trial balance. Accounts Payable 10,000 Accounts Receivable 11,000 Advertising Expense 12,000 Cost of Goods Sold 89,000 Delivery Expense 6,

Problem 1-2: Users of Accounting Information and Their Needs Havre Company would like to buy a building and equipment to produce a new product line. Information about Havre is more useful to some people involved in the project than to others. Complete the following chart by identifying the information listed with the use

Marriott International, Inc., and Wyndham Worldwide Corporation are two major owners and managers of lodging and resort properties in the United States. Abstracted income statement information for the two companies is as follows for a recent year: x Marriott Wyndham x (in millions) (in millions) Operating profit before oth

I just finished working with my team and we decided to invest in dividends in Q8. (We haven't done it before as per the prof.'s advice). Using the 34% as payout takes $15,665,265 of our cash. Although we projected good figures for our net income and cash balance in Q8, I think it's too much money. Attached please find the fin