As a result of the 1929 stock market crash and following Great Depression, American regulators began feeling a pressing need for better regulation of the securities industry and the financial information surrounding public companies. As a result, the 1934 Securities Act was passed, which created the Securities and Exchange Commission (the SEC, or the Commission). This sweeping legislation established the SEC, making the Commision responsible for enforcing federal securities law in the United States. As a part of this role, the SEC has legal authority for establishing accounting and financial reporting standards for publically traded companies.

However, since this time the SEC has delegated its role in developing and presenting accounting and financial reporting standards to the private sector. In 1973, the Financial Accounting Standards Board (FASB), a not-for-profit organization whose primary purpose is to develop generally accepted financial reporting standards (GAAP) for U.S. issuers. The SEC has currently delegated authority to the FASB to be the sole provider of authoritative U.S. GAAP (however, the SEC's own Rules and Interpretive Releases are also authoritative GAAP for companies who file with the SEC). In recent years there has been some discussion by the SEC about the role that International Financial Reporting Standards (IFRS) should play in U.S. GAAP. If the SEC choses to allow U.S. issuers to file financial statements using IFRS, the role of U.S. GAAP, and thus the role of the FASB would be limited.

Currently, the FASB and the International Accounting Standards Board (IASB) have been working jointly in order to converge U.S. GAAP and IFRS, while the two standard-setting bodies remain independent, each releasing their own set of rules. These efforts have the goal of improving the quality of both sets of standards, while minimizing or eliminating the differences between them. (Also see: Accounting Standard Convergence)

Ethical standards for the accounting profession are determined by the American Institute of Certified Public Accountants (AICPA). A division of the AICPA, the Auditing Standards Board (ASB), develops and sets out generally accepted auditing standards (GAAS). Before FASB, U.S. GAAP was set by another division of the AICPA, the Committee on Accounting Procedure (CAP) and later the Accounting Priciples Board (APB). These bodies have since been replaced by the seperate entity FASB for developing U.S. GAAP.

In the United States, the framework for accounting and financial reporting standards can be broken into four layers:

(1) The conceptual framework of accounting: The conceptual framework of accounting outlines the theory behind the rules are the way they are, or the way rules ought to be. It deals with questions such as: what is the objective of financial reporting? who are the primary users of financial reports? what characteristics should useful accounting information have? and what are the decision-making elements necessary for the financial statements?

(2) Basic GAAP: Basic GAAP is a set of basic guidelines and principles that form the groundwork for the more complex and specific accounting reporting standards. These are typically learned early on by accounting students, and help students deal with ambiguious situations when applying U.S. GAAP to different situations.

(3) US GAAP: These are the more complex and legalistic accounting and financial reporting standards which are built on top of basic GAAP. They deal with specific circumstances as much as possible, fo rexample, the different methods of allocating depreciation.

(4) Generally accepted industry practice: In accounting, typically the application of accounting procedure applied by one firm in an industry is copied by other firms. This aids in making firm's within the same industry comparable. As a result, these standards are important when an accountant must choose betwee taking its own course or aligning its significant accounting policies with those of its competitors. 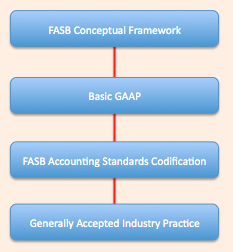 The Conceptual Framework of Accounting

Please provide 1-2 paragraph for each question plus provide APA references. I have also included an example for you to understand better for each question: 1. How significant is the cumulative impact of modest inflation rates that accompany normal economic growth on the financial statements of companies that hold long-l

Why should we be knowledgeable about the business purpose? What impact does the type of business have on the degree of structure within an organization chart? What is the history of the PCAOB and what is its role today? What other governing bodies are used in accounting to oversee fraudulent matters? How does the PCAO

"Sarbanes-Oxley "covers auditor independence, corporate governance, internal control assessment, and financial disclosures" (Bennet-Alexander, 2011, p. 327). According to Ms. Watkins reasons for what went wrong it appears that had Sarbanes-Oxley been in place prior to 2002, companies like Enron would have had a much more challen

The recent financial crisis has turned the spotlight on fair-value accounting (FVA) and led to a major policy debate involving among others the US Congress, the European Commission as well as banking and accounting regulators around the world. Critics argue that FVA, often also called mark-to-market accounting (MTM), has signifi

Advantages and disadvantages of cash-based accounting

Consider the features of cash-based accounting and respond to the following: Discuss some of the advantages or disadvantages of using the cash-basis method of accounting. Provide some examples.

Prepare a flowchart which demonstrates how accural accounting and cash flows are linked for a merchandise sale. Analyze the impact on the financial statements of each. Provide the required references, if applicable.

See attached 1. In 2013, Lucy's Chaotic Construction Corporation began construction work under a three- year contract. The contract price is $1,600,000. Lucy uses the percentage-of-completion method for financial reporting purposes. The financial statement presentation relating to this contract at December 31, 2013, is as fo

1. Answer the following question using an essay format with a maximum that ranges between 300-500 words for each question. a) There are three main forms of firm's ownership sole proprietorships partnerships and corporations in business organizations. identify and explain these forms in private firms. b) There are three types o

CBA, a bicycle manufacturer, uses an activity based costing system for budgeting. CBA has identified four cost centers and their associated cost-drivers. The variable and fixed costs for each activity are listed below, along with cost-driver activity.     Activity Processing Administration Variable Cost $160,000 $1,6

Sally, The setting of standards is critical to the effective use of standards in evaluating performance. Explain the following in a memo. (a) The comparative advantages and disadvantages of ideal versus normal standards. (b) The factors that should be included in setting the price and quantity standards for direct materi

May I have any suggestions abut the following points: a)The most helpful skills or knowledge that you learned in your accounting courses and how they were or were not relevant to your internship experience. b) What additional preparation could have helped you do a better job as an intern. c) The types of technology use durin

Why are accounting standards for sustainability reporting needed?

Reflection 1) What is your opinion on the questions below? A solid set of accounting standards is also part of an economy's infrastructure. Investors don't want to put up capital unless there's a system that communicates financial results. There also must be an element of trust in that system. In addition, external report

As more companies responds to calls to report on social and environmental issues an accounting standard covering this is urgently required. Critically discuss this statement, concluding with whether or not you agree with it.

FASB and IASB have been working on a Convergence Project for over ten years. In a 1-page essay discuss the two standard-setters and the body of standards issued by each. What is the objective of convergence?

Accounting Standards 1) What is your opinion on the question below? Accounting standards are part of the infrastructure in our economy. Comparability and trust in published financial information are important for many different reasons. We need to examine the organizations involved, current trends and other issues affectin

Problem A Government invests and takes an equity position (20%) in Subsidiary #2 which is a newly created LLC under the Parent. Funds received by this investment are used to pay off Debt and Payables associated with Subsidiary #1 an incorporated company 100% owned by parent. What is the Journal Entry to show the equity p

When a company makes an expenditure that is neither a payment to a creditor nor a distribution to an owner, management must decide if the expenditure should be capitalized (recorded as an increase in the asset) or expensed (recorded as an expense thereby decreasing owner's equity). 1. Which factor or factors should the company

Need help with an outline for my research paper with ideas. My thesis is: Although accounting for lean is a more efficient and effective method of measuring production performance, the concept has not been embraced for external financial reporting. My options for solving are: My problem solvers are one....getting GAAP to

How has the Sarbanes-Oxley Act (SOX) and the Public Company Accounting Oversight Board (PCAOB) affected corporate governance of US companies? Do the benefits of improved disclosure justify the additional disclosure costs? Who gains the most benefit from these disclosures?

Fiduciary funds are accounted for differently than permanent funds, even though both may account for nonexpendable resources. Christopher City received a contribution of $520,000 to provide scholarships to the children of deceased city employees. The donor stipulated that all income, including both realized and unrealized inve