The cell cycle, which occurs in both eukaryotes and prokaryotes, is a process which allows for a cell to be duplicated. In prokaryotes this mechanism is termed binary fission and in eukaryotes, the cell cycle consists of several stages.

Binary fission is a simpler process than mitosis. This process begins with the original cell DNA being duplicated so that two copies are present and can be attached to different parts of the cell membrane. After this, the cell becomes subdivided into two new cells, with each cell containing a piece of DNA. In the end, two identical cells are produced.

In eukaryotes the cell cycle is a more complex process which is comprised of multiple different phases. The phases are as follows:

Mitosis is the portion of the cell cycle responsible for cell division and the production of two new daughter cells. 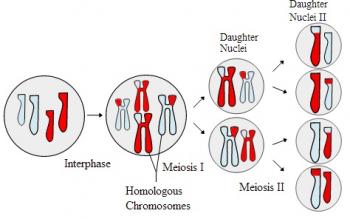 Meiosis is a process required for sexual reproduction in eukaryotes in order to produce egg and sperm cells.

Need help answering the following question. I have read my chapter and looked on the internet, but still cannot seem to answer the question. Explain how can a person be dead and 99% of his/her cells can be alive.

Please help with the following problem. Provide at least 200 words. Why might programmed cell death (apoptosis) occur through a different mechanism than from the cell death that occurs in necrosis? What might be the consequences if apoptosis were not achieved in an orderly fashion, in which the cell destroys itself from with

You are working in a laboratory investigating the effects of new chemicals called X and Y that kill cells. To test whether X and Y cause necrosis or apoptosis, you briefly treat cultured cells with each chemical and perform several assays. A. First, you examine the chromosomal DNA. You isolate DNA from cells, label 5' ends wi

prophase of mitosis differs from prophase I of meiosis

Why is dye used to view bacteria through a light microscope? What are the steps in Gram staining? What structures do plant cells possess that animal cells do not? What is the function of these structures? Where does aerobic respiration take place in the cells of eukaryotic organisms? What is the respiration equation? What

Compare/contrast the growth process and life cycle of plants and animals.

Information regarding meiosis with respect to gametes, haploid number and general comparison to mitosis.

Description of the cell cycle

Briefly describe all phases of the cell cycle and tell what happens in each. a)Interphase: G1, S phase, G2 phase. b)M phase If a cell never entered the resting phase would it be a problem? Why? What is the "Independent Assortment" of chromosomes? Who is associated with this theory? During what phase o

Mechanism of action of chemotherapeutic drugs

Two examples of chemotherapeutic drugs and their cellular actions are listed below. Explain why each drug could be fatal to a cell. Vincristine: Damages the mitotic spindle. Adriamycin: Bind to DNA and blocks mRNA synthesis

The life and death of cells are governed by

The cell theory states that all living organisms: a. grow and develop b. respond to stimuli c. are composed of basic units called cells d. can move from one place to another in order to find food or to escape predators. e. can form a population of organisms that is able to adapt to the environment.

1) Describe the process of spermatogenesis. 2) Explain the hormones and phases of the uterine cycle.

Need help with this one

List the three tenets of the cell theory. Relative to the third tenet of this theory, how can it be that there are so many different kinds of cells?

Comparison of the cell cycle in plant and animal cells

1) How is cell division between plant cells and animal cells different? 2) What are some factors that affect the cell cycle? (there are 4 of them that I have to know, but I'd like to know all if possible)

Scientists took genetic material from one sheep to clone Dolly, making her genetically identical to the other sheep from which she was cloned. Cloning uses the process of A. mitosis B. chromosomal replacement C. autosome reproduction D. meiosis E. genetic evolution

What happens to the nuclear membrane and nucleoli during prophase?

How much DNA is found in the nucleus of a cell in G1 as compared to G2?

How much DNA is found in the nucleus of a cell in G1 as compared to G2? Explain your answer.

Stage of Interphase that Allows Cells to Grow

During which stage of interphase do offspring cells grow to mature size?

A. Drugs that inhibit microtubule assembly are administered for some medical conditions. What will occur to the cell as a result? For what type of conditions would such a drug be given? B. Colchicine is a chemical used to treat dividing plant cells to ensure that chromosomes of cells undergoing mitosis will be visible. How

If the homologous pair doesn't separate during anaphase in Meiosis I, what does the end product of the cell division look like after the first and second meiotic division with that aberration?

When do strands of DNA form chromosomes?

MITOSIS AND MEIOSIS PROCESSES AND OUTCOMES

COMPARISON AND CONTRASTS OF MITOSIS AND MEIOSIS PROCESSES AND OUTCOMES diagrams and explanations for powerpoint presentation.

1. Describe the changes in clarity and viscosity of a nuclear suspension that occurs upon the addition of Sodium Dodecyl Sulfate (SDS)? Why do they changes occur? 2. Thymus cells have a relatively small amount of cytoplasm and this feature makes thymus tissue ideal for DNA extraction. Why? 3. Describe the basic ce

How is cell division controlled?

How is cell division controlled? Do all cells continuously divide? Why or why not? What are the ramifications of uncontrolled cell division?