Food webs play a central role in depicting feeding relationships and energy flows in an ecosystem. Food webs display the linkages between all organisms within a community and thus, can become rather complex, especially if there are a large number of organisms involved.

When analyzing a food web, the organisms depicted on the bottom represent the producers and the organisms at the very top represent the top predators. The in-between levels are filled with all of the consumers within the community, starting with the primary consumers, then secondary consumers and so on. Some food webs also include the decomposers, although the placement of these organisms varies. In some cases the decomposers are placed under the primary producers and in other instances along the side of the food diagram. Nevertheless, arrows are utilized to depict the flow of energy to and from the decomposers. The figure below provides an example of a food web.1 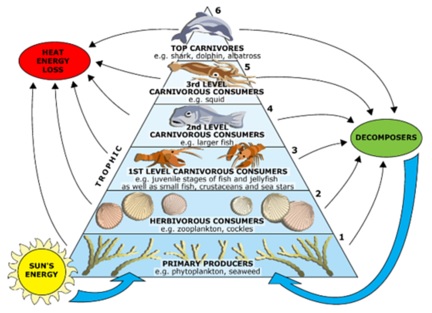 Furthermore, food webs are also useful when trying to understand the movement of toxins. Toxins of low biodegradability can bioaccumulate up the trophic levels in a food web, with the highest levels affecting the top predators.  Evidently, food webs are useful for depicting relationships between organisms and understanding ecosystem stability.

DDT's Effect on the Food Web

1. You need to make predictions on how each part of the food web would be affected by the spraying of DDT. These are to be predictions. It is highly doubtful you will get all of the predictions correct without doing research. Please make sure to address all parts of the food web pictured. General Information: In the 1950's, t

Please help me calculate GPP, Increase in biomass, photosynthetic efficiency, etc., by explaining how you arrived at the final answer and showing all of the equations or formulas involved in each calculation. Kindly use the correct scientific units throughout the calculation, as well as in the final answer. Please use scientific