The Renaissance period began directly following the Middles Ages in Europe, from the 1300’s to the 1600’s. The definition of Renaissance – rebirth - indicates it was a time when ancient traditions (from the classical era) were once again embraced in the areas of philosophy, literature, music, art, and science.

The Florentine painter Giotto di Bondone is known as the innovator of the Renaissance style. His style was clear and simple, yet thought-provoking, as opposed to the ornamental and decorative arts of the Middle Ages. He also made impressive progress in realistically representing the human body.

Other famous Renaissance artists include Italian artists Leonardo da Vinci, Michelangelo Buonarroti and Raphael Sanzio. Leonardo spent much of his time studying anatomy, science and engineering but managed to produce a few very famous paintings, such as “Mona Lisa” and “The Last Supper”.1

Michelangelo was the dominant sculptor of the High Renaissance (beginning in the 1490’s), although he was also an accomplished painter. His most famous works of art are “David” and “Pieta” in St. Peters’ Cathedral, as well as the fresco (mural painting on fresh lime plaster) on the ceiling of the Sistine Chapel. Raphael focused on the beauty of the natural world and painted such works as “The School of Athens” in the Vatican.

It was in Venice that artists Giorgione and Titian, among others, moved from fresco paintings to painting in oil directly on canvas, which allowed the artist to rework an image. This technique is still dominant in present day. 1 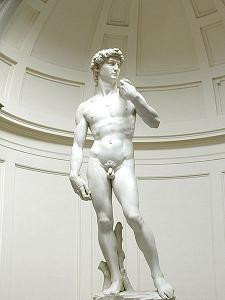 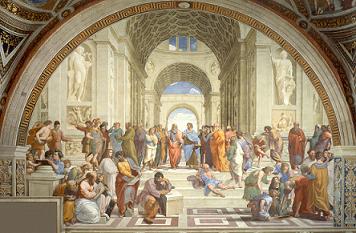 The Renaissance was a rebirth of Greek and Roman culture, both of which placed the human at the center of the universe. Leonardo da Vinci's Mona Lisa and Michelangelo's Ceiling from the Sistine Chapel are two famous artworks from the Renaissance that both reflect and respond to the resurgence of humanism in European history. Bot

Prepare an essay on what is classical art?

Donatello's David and The Rome Pietà

1. What form would you consider the work? - Is it a two-dimensional or three-dimensional work of art? - What materials are used? - What techniques or processes are used to create the artwork? - What colors are used? - Describe the use of line, shape, texture, value, color, and balance. 2. Does the work of art have sub

Discuss: How does Clouet's painting reflect the culture and ideology of the Renaissance Era? Provide an explanation of the values, influences, themes, techniques, subjects and characteristics of the period or style under study. Some information about how the social, political, or religious history of the period influenced art an

Michelangelo's Moses in Judaism and Christianity

In 100 to 200 words discuss how Michelangelo's Moses represents developments in world events and cultural patterns past and present in Judaism and Christianity.

Choose a patron and a commission. Discuss the ways in which the commission represents the aims and characteristics of the Italian Renaissance. Include a discussion of iconography and humanism. Your answer should be several paragraphs in length.

Select two 15th-century (early) Renaissance art pieces. For each piece, offer a name, artist, location of the piece, and citation so you can locate the piece again with ease. While doing your research, consider this criteria. The specific description of the piece must include a brief analysis of the work relative to the appr

Contrast three works of da Vinci with three of Michelangelo

Contrast three works of da Vinci with three of Michelangelo. How did the two artists influence the art of the 16th century in Italy and Europe? Use examples to support you claims. do research in peer-reviewed journals or other journals that are considered to have reliable information (Do not use sources from the secular press, i

Examine the importance of architecture of Bramante and evaluate how his architecture represents the attitudes and aesthetics of the High Renaissance. Your paper must be at least four pages long and you must use five works to support your analysis. In addition, you must also use two scholarly resources in addition to Gardner's Ar

Please help with the following problem. Give a bibliographic listing of sources that can be used to compare and contrast the works of two Renaissance artists: Leonardo da Vinci and Michelangelo.da Vinci vs Michelangelo.

Compare & Contrast 2 Sculptures from either Renaissance or Baroque Periods

Compare and contrast two sculptures which portray the human figure. One must be from either the Renaissance or Baroque period. Select the other sculpture of the human figure from any of the earlier cultures that we have studied so far, from Prehistoric to the Medieval periods. What role did the human figure play in the art work

First briefly explain what primarily distinguishes Renaissance art in general from the prior Medieval period. Then, trace the evolution and development of art through the periods of the Early Renaissance to the High Renaissance. Compare and contrast the work of an Italian Renaissance artist with a work done by a northern Europea

In what ways does Francois Clouet's Lady in Her Bath painting reflect the ideology and culture of the Renaissance Era?

What influence of Italian art do you see in Velázquez's paintings?

Please evaluate the artwork, and compare and contrast Venus and Adonis to the works of Venus and cupid, and the birth of Venus. including materials used, style, meaning, symbolism, and any other aesthetic issues concerning the art you have chosen. Explain how the works of art fit into the context of the time period. Please incl

Please compare and contrast the two

Michelangelo Buonarroti and Leonardo da Vinci were considered masters of these two qualities. Compare a work of art from each artist. Describe what each work intended to communicate, and discuss how the works communicate their messages. Discuss SPECIFIC techniques that each artist used to convey meaning. For example: compositio

Art History in the form of pieces by Michelangelo Buonarroti and Leonardo da Vinci are discussed briefly.

Michelangelo Buonarroti and Leonardo da Vinci were considered masters of these two qualities. Compare a work of art from each artist. Describe what each work intended to communicate, and discuss how the works communicate their messages. Discuss SPECIFIC techniques that each artist used to convey meaning. For example: compositi

I need guidance on how to obtain information for a paper that needs to be completed. The following is what needs to be addressed, the paper is on Leonardo da Vinci Extensive discussion of his ideas and artistic works and contributions. Why he is recognized as a genius. His impact on Western culture. Image of his wo

I need assistance in answering the following questions for Renaissance Through Contemporary Art. I am so over whelmed with some of my other classes that I am having trouble answering these questions. Any help you can provide is greatly appreciated. Part A. Consider how our contemporary culture has equivalents to Neoclassicis

Compare and contrast Donatello's bronze sculpture of David with his polychromed wood Mary Magdalene, listing several ways the two statues are different and/or similar. What are your personal impressions of each?

COMPARE TITIAN'S VENUS OF URBINO WITH MICHELANGELO'S DAVID. DETERMINE HOW MEN AND WOMEN WERE PERCEIVED IN 16TH CENTURY ITALIAN SOCIETY.

Sculpture from the Earlier Renaissance Period

Data about a sculpture from the earlier Renaissance period occurs. Information includes: 1. Materials used 2. Style and meaning 3. Symbolism 4. Aesthetic issues concerning the art 5. Explain how the works of art fit into the context of the time period

Two criteria are used to judge the quality of a work: craft (how well an artwork was made) and communication (the uniqueness of the artist's vision and its message or meaning). Michelangelo Buonarroti and Leonardo da Vinci were considered masters of these two qualities. Compare a work of art from each artist, citing SPECIFIC tec