The Baroque art era includes works created between the early 1600’s and the mid 1700’s. This style of art was ushered in by Italian artists Annibale Carracci and Caravaggio, who painted in classicistic and realist styles, defying the late Renaissance traditions¹

The specific Baroque style is identified by its complex, dramatic, exaggerated, detailed, and ornate design. The art is meant to evoke emotion, tension, and drama, and to be powerfully influential and persuasive.¹ The Catholic Church recognized and embraced this influence of art for religious purposes and hired their own artists, such as Gian Lorenzo Bernini, to create images that would help guide their followers. These images would be accessible to all, and would strengthen the faith of many by creating a visual connection to important biblical events.²

The term “Baroque” was not initially a flattering name. It was coined by those in the 18th century who thought the artwork was odd, grotesque, and over-decorated. It wasn't until the late 19th century when Heinrich Wölfflin pioneered a study of the Renaissance and Baroque art periods that the terms began to be used as a stylistic design.² 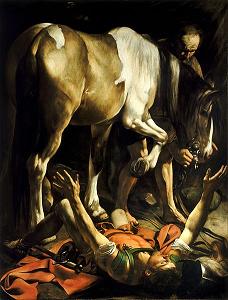 Conversion on the Way to Damascus (1601) by Caravaggio

Assumption of the Virgin Mary by Annibale Carracci 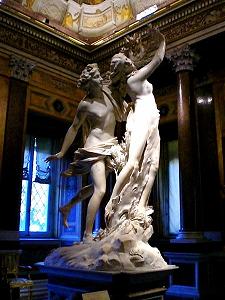 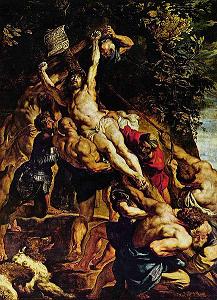 This posting offers notes about how the artists express their styles and comparisons and mostly contrasting of 2 paintings below: Peter Paul Rubens Tiger, Lion and Leopard Hunt Anne-Louis Girodet Revolt of Cairo

How do the styles and the imagery of chaos compare and differ from the 2 paintings below Peter Paul Rubens Tiger,Lion and Leopard Hunt Anne-Louis Girodet Revolt of Cairo

For each piece, offer a name, artist, location of the piece, and citation so you can locate the piece again with ease. The specific description of the piece must include a brief analysis of the work relative to appropriate use of some of the following terms: line, color, value, texture, shape, form, space, balance, emphasis,

Please pick a work of art from this time period (1450-1700) that catches your eye. It can be one that reminds you of an event from your own life or otherwise gets some kind of emotional reaction from you. Then provide: - Some information about the artist; - How the work you chose reflects typical Baroque or, alternatively, cla

What are the changes you notice between Roman and Early Christian art and architecture, and what can account for them? (for example: differences in temple architecture vs. Christian church buildings). you will tour Chartres Cathedral at the website provided: http://www.ithaca.edu/chartres/newsplash.html

A cultural anthropologist seaching for a hidden capsule from BOTH the Renaissance and the Age of Baroque.

I need help with this assignment please.Word count from 1050 - 1400. A cultural anthropologist seaching for a hidden capsule from both the Renaissance and the Age of Baroque. In each capsule it is rumored that there are at least two examples of each locked inside: Art Music Descriptions of drawings or architecture Philosop

How is art altered?

Social, political, or economic conditions can alter the nature and meaning of art. Be certain to support your position with examples that compare and contrast at least two of the following eras: Baroque, Rococo, Neoclassicism, and Romanticism. Choose specific examples of artistic achievements from the two eras. Examples shoul

An explanation of the works of art: Baroque, Pop art and Abstract expressionism works that fit into the context of the time period is given. I compare three works in terms of form, content, and subject matter.

Choose three works of art that are from the same time period or style and that have a similar theme.

Choose three works of art that are from the same time period or style and that have a similar theme. The works of art should be from your textbook or approved by the instructor. (Examples of styles are: Baroque, Romantic, Impressionist, German Expressionist, Cubist, Abstract Expressionist, Pop Art, and Post Modern). *A